It took me a while to log on to this blog. I forgot the password and even how to post a blog for a while. I'm finding my way back after a long absence. Will see how things goes. Just a quick catch-up, in case anyone is still reading this blog and interested in my life: I had a roller coaster couple of years. Last year I was in hospital for brain surgery. During a visit to the dentist in 2016, they took a scan of my teeth, and the scan was so powerful it caught a tumour in the region of my brain, and they had to take it out. A few months after I was discharged, my mother passed away, so we had to prepare for her funeral. I haven't found much time or mood to read these couple of years, but I am coming back. I am also hoping to do more journalling. The type of journaling with a physical pen in hand and a notebook with real paper. We'll see how that goes.
Posted by darkorpheus on Tuesday, June 05, 2018 No comments:

Posted by darkorpheus on Tuesday, June 05, 2018 No comments:

Posted by darkorpheus on Saturday, September 24, 2016 No comments:

BOOKS | The End of Your Life Book Club, for the Waiting Room

After The Obelisk Gate, I was at a temporary loss at which book to read next. I eventually started on The End of Your Life Book Club, and continued On the Move, the Oliver Sacks memoir that I picked up from the library a while ago.

Will Schwalbe, the author of The End of Your Life Book Club, started writing this when his mother was being treated for cancer. They spent many hours sitting in the hospital waiting together, and to pass the time, they started talking about books. They got around to exchanging books, and Will told his mom that this will be a bookclub of two.

It was the state of my mind then, which led me to pick up The End of Your Life Book Club. I am following up on some medical issues right now, and it has led me to some reconsideration of my life and my priorities. I have also been spending too much time in the hospital waiting room this year, and on days when I forgot to bring something to read, the waiting just feels harder. Which is perhaps why The End of Your Life Book Club rang true to me; I have always believed a person's brings their own experience and state of mind into the books they read. We are meaning-makers, and if someone is made conscious of their own mortality, how will this likely influence their reading?

I was reading this book last week while waiting in the hospital waiting room. So far, it feels interesting, and the conversations between the family and their dying mother were touching. They obviously love their mother. Sadly, it reminded me of my own damaged relationship with my mother. I thought about how it was all those weekly Saturday trips to the library with my mother, that probably turned me into the reader that I am now. Yet ironically, I have never discussed books with my mother.

I'm barely a quarter into the book, but it has already made a recommendation for a title to check out: Susan Halpern's Etiquette of Illness. The book was supposed to be able how to talk to people with illness. It's something that I feel I should pass to friends and acquaintances. To offer as a guide on how to approach this.

Some tips from the book on how to approach the people with illness:

1. Ask: "Do you want to talk about how you're feeling?"
2. Don't ask if there's anything you can do. Suggest things, or if it's not intrusive, just do them.
3. You don't have to talk all the time. Sometimes just being there is enough.

I felt there could also be a fourth tip - depending on the person, it is also important to know when to give space, and respect their need for privacy. Most of all, don't always assume you know better - because you don't.

Posted by darkorpheus on Sunday, September 18, 2016 No comments:

The Ghostbusters, and Why It Represents What I Want to See in Books and Movies 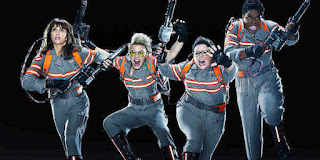 I'm an unabashedly loud fan of the all-female remake of the Ghostbusters movie. I have the toys to prove it - including the Lego set with Ecto-1.

This article from Bust magazine was listing out the reasons why it's so important for women. The writer did have a very important quote from Kate McKinnon, who played the kooky and charismatic Holtzmann in the movie, and I think it also captured why I loved the movie so much:

In short, maybe McKinnon put it best when she said, “But his [director Paul Feig] most revolutionary act has not been in casting women as scientists and badasses. We’ve seen that before. Ish.

I would like to see more good movies made, where the women characters are not there to be the wives, the girlfriends, the desperate single female pining for a man to love her. This is also one of my pet peeves about some of the Young Adult novels I read recently - why does it seem like the romance is the most important part of the story? Can we just have female characters that are interested in friendship, in personal growth, and of course, occasionally, in saving the world? The Hunger Games would be so much better without the love triangle. Take out the romance, and The Hunger Games would be about a brave young teenager who would sacrifice herself to save her sister, and end up becoming a symbol of something larger than her, and overthrowing a flawed government in the process. Well, it still is that, but the love triangle part of the story dragged it down for me.

As a woman, I would like to see more stories where women help lift each other up, instead of backstabbing and jealous in-fighting - especially over another male. I want to see more stories of women being themselves, unabashedly, confidently, but with compassion and good-humour.

Posted by darkorpheus on Sunday, September 18, 2016 No comments: 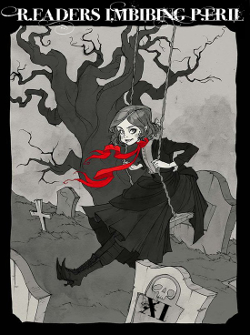 I'm done with my first book in the challenge: The Obelisk Gate, by N.K. Jemisin.

Posted by darkorpheus on Monday, September 12, 2016 No comments:

A long time ago, when I used to blog more frequently, I joined reading challenges. I did it for fun, and it was fun to be connected somehow through other book geeks around the world. Then I stopped blogging. I stopped reading even.

I'm back reading again, though I don't write as much as I used to.

I can do that, right? So I shall attempt to read at least 2 books from the genres mentioned. For my reading list, I choose:

Let us just have fun with it, right?

Posted by darkorpheus on Wednesday, September 07, 2016 No comments:

I just finished reading N.K. Jemisin's The Fifth Season, and am working my way through the second book in the series, The Obelisk Gate. It's been a wild ride. Grand world-building, with a world built on people, known as orogene, or rogga, as they are also called by those with little reason to love them. It is difficult to explain how the orogenes' powers work, but in a nutshell, they are able to harness the energy in the physical universe, and part of it includes harnessing sesmic forces - they are able to cause and redirect earthquakes, air and wind currents, heat and other types of energy. They are born with their powers, and their race has been vilified for their potentially destructive powers. It's a story full of a lot of hate, and death, as it begins with a father's murder of his son, after he realised his son is a rogga, inherited from their mother. The mother returns to find the battered body of her son, and her husband and older daughter, gone. Oh, did I also mention it also begins with someone setting out a massive sesmic rift that brought forth a type of apocalypse? Yeah, there's a lot of death and destruction in just the first few pages.

The story unfolds with multiple point-of-views, and I was curious how these different plotlines and characters will converge later. The beauty is they do eventually fold unto each other seamlessly, like stacking up Russian dolls, until there is only one grand doll left. Jemisin patiently builds up the intrigue, in the nature of her world, and the characters. There is a grand mythology at work, and you are left with a nagging sense at the back of your mind that the history and lore in this world is never the truth, and there's always something that was forgotten, or lost and misinterpreted through time and memory, or manipulated by those who in power. From the beginning, you are told this:


This is what you must remember: the ending of one story is just the beginning of another. This has happened before, after all. People die. Old orders pass. New societies are born. When we say "the world has ended." it's usually a lie, because the planet is just fine.

The Fifth Season was one of the few books lately that made me stay up all night to try to finish reading it, because the story was so compelling. Not just in the world she creates, but also in the themes, and the social consciousness inherent in her stories. In the Foreword of The Fifth Season, it says:


For all those who have to fight for the respect that everyone else is given without question.

Which reminds me of the recent debacle of the Sad Puppies and the Hugo Awards, where some "aggrieved" people (I'm not sure if I want to call them "fans") are trying to manipulate the results of the Hugo Awards. Jemisin by the way, won this year's Best Novel Hugo Award with The Fifth Season. (The Atlantic spoke with Jemisin after she won, and she is both articulate and thoughtful about her books, and what drives her as a writer.)

For me, what's interesting about Jemisin's stories is her narrative on power - how we would seek to control those with power, because we fear them, and because we seek their power to serve us. In The Fifth Season, the orogenes are brought up to be trained in controlling their powers, and to serve the Fulcrum - the faceless authority in their world. However, those who are not able to control their powers are taken away. Brutal brain surgery were performed on them to reduce them to a zombie state, strapped to a wire chair, and sent to node stations across the country, so use their powers to repel earthquakes etc. It is one of the more disturbing part of the book, but so powerful as it set up the motivation for the characters later, as this is a cruel, unjust social system that needs to be broken, so that one might build something better.

I love her stories that dare says, we cannot look away from a cruel, unjust system, and we need to have the courage and the strength to change it, for something better. And I love that her universe is populated by people of different races, of various shades of colours, and sexual orientation. Her stories do not look away from differences, and prejudices - but acknowledges them as part of the world as it is. That, is something beautiful.


Posted by darkorpheus on Monday, September 05, 2016 No comments: