Have interrupted my reading of Swann's Way and War and Peace with ... The Moonstone.

Wilkie Collins's The Moonstone is one of the classic detective novel of the 19th century. Dickens stole something from it for Edwin Drood. Dorothy L. Sayers admired it. It's also a sensation novel that thrives on intrigue and semi-colonial romanticism. 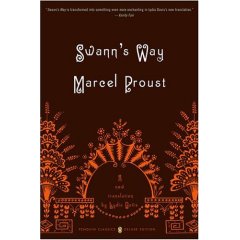 The question arises last night on how one can do such heavy reading at the same time? My explanation: short but frequent readings - kind of like watching Desperate Housewives and Lost in the same week, but somehow you can still follow the storyline.
Posted by darkorpheus on Monday, July 24, 2006 No comments:

I am out of shape. Just a few rounds of Sun Salutations and my triceps and shoulders ache.

Out of shape. Which means I need to work on Power Yoga.

Yin yoga today with A.
Posted by darkorpheus on Monday, July 24, 2006 No comments:

WINTERSON | Books Are More Than Product

Neither would I - me, the book buyer/book seller, and anyone who collects books because of a muddled kind of love.

Full article.
Posted by darkorpheus on Monday, July 24, 2006 No comments:

PROUST | The Person That We Know

Even the very simple act that we call "seeing a person we know" is in part an intellectual one. We fill the physical appearance of the individual we see with all the notions we have about him, and of the total picture that we form for ourselves, these notions certainly occupy the greater part.

The child narrator relates how his family seem to blinker themselves to Charles Swann, choosing what they want to see instead.

We probably have known instances when our friends see us only as their notions of us, not as ourselves truly.

Charles Swann is obviously a greater man of the world than the family wishes to allow. He is a man with the kind of prestiguous contacts and glamorous acquaintances that you only read about in Le Figaro. Yet, the narrator's grandmother only sees him as the son of their neighbour.

It says something about the inherent tunnel vision of the narrator's family - which admits only that which it is comfortable with, and blinds itself to that which is potentially new, and bigger, if not fuller. Later the narrator tells us about his aunt, who is disturbed if there should be anyone in her small village that she knows nothing about. When that happens, she sends her servant to the grocer (the fount of local gossip apparently) for intellgience.

While I am charmed by the wispy recollections filled with comforts and gentle, familiar pleasures, Combray strikes me as a hermetic society.
Posted by darkorpheus on Tuesday, July 18, 2006 No comments:

Those Who Have Courage to Love

I wrote this little quote in my copy of Jeanette Winterson's The Passion. 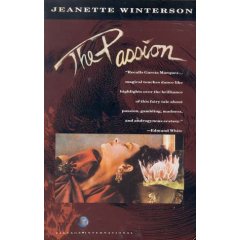 Posted by darkorpheus on Saturday, July 15, 2006 No comments:

Just signed up with Pure Yoga. So I'm back to my practice, slowing rebuilding my stamina and strength.

From someone who previously fell to 1 practice session a week, I'm now doing it 4-5 times a week. I see it as progress, although it could be another indication of my addictive personality.

Meanwhile, I would like to introduce everyone to my new yoga practice: Yin Yoga.

In a nutshell, you hold your poses in Yin Yoga for 3-5 minutes. The emphasis is on the connective tissues, and there are a lot more hip-opening poses. I find that I enjoy it.
Posted by darkorpheus on Saturday, July 15, 2006 3 comments:

Actually, they've been at it for a while. From all the various posts, I've gleaned a few Italian authors that I would like to sample:

Also adding Umberto Eco: The Name of the Rose for next year's reading list.
Posted by darkorpheus on Saturday, July 15, 2006 No comments:

I need to finally sit down and finish Umberto Eco's The Name of the Rose. I first read (but never finished) the book in 1999. I brought it with me to the beaches of Koh Samui straight after graduation, but the leisure beach-bum life got in the way.

The only Umberto Eco I actually finished reading was Foucault's Pendulum. It helped that I was reading it when I was supposed to be working on my thesis: William Gibson and the Cybergothic.

The dilemma: work on thesis or read Eco's meandering book.

I chose the latter, but it still a long time. I would read a few pages, then set it down (bookmark in place). After some time (maybe a few months later), I would pick it up again, and continue. That took two years.

"No," I insisted. "In between I did other things."

Remember: reading is as healthy an interest as sports - but you're supposed to have a life.
Posted by darkorpheus on Saturday, July 15, 2006 No comments:

QUIZ | What European City Do You Belong In?

I don't agree. I so prefer to be in an Italian city. Can I belong in Rome?

What European City Do You Belong In?
Posted by darkorpheus on Friday, July 14, 2006 No comments:

From Neil Gaiman's blog on the movie adaptation of Stardust:

Ha! Michelle Pfeiffer in any sort of gratuitous violence is SOOOOO something I want to see! Here's a preview screenshot from the Stardust movie: 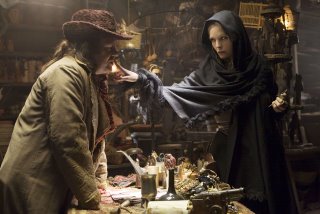 Screenshot courtesty of Ain't It Cool News
Posted by darkorpheus on Wednesday, July 12, 2006 No comments: 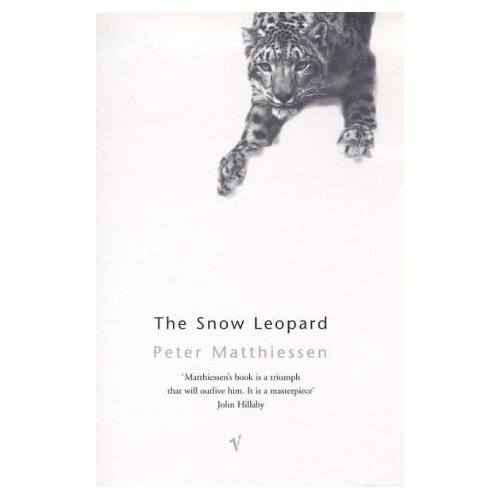 In the two hours before my yoga class last night, I finally finished re-reading The Snow Leopard. It took a while - more than a month. Perhaps I did not wish to rush it. I also know that this is a book I will re-read in the near future.

Back then, Peter Matthiessen was also a student of Zen Buddhism. Before he left, his roshi (his Zen teacher) warned him to "Expect nothing." The roshi also issued him a koan:

All the peaks are covered with snow – why is this one bare?

Thus journey is pilgrimage, is meditation.

"I long to let go, drift free of things, to accumulate less, depend on less, to move more simply," he writes. One of the fundamentals of Buddhism – the religion of the land they tread - to simplify, to let go and thus liberate yourself from suffering.

In between the narrative of his journey and the exposition on Buddhism – Matthiessen writes about his wife, Deborah, who died a year before. He reveals his love for her, and his regrets. He also writes about the enigmatic Sherpa guide, Tukten – a dubious figure who is also a tulku – a reincarnate of a learned lama.

Matthiessen never saw the snow leopard. In the acceptance of his non-encounter is the triumph. The paradox in spiritual quest that I have only begun to sense but not yet comprehend.

If the snow leopard should manifest itself, then I am ready to see the snow leopard. If not, then somehow (and I don’t understand this instinct, even now) I am not ready to resolve my koan; and in the not-seeing, I am content. … That the snow leopard is, that it is here, that its frosty eyes watch us from the mountain – that is enough.

I am still looking. Matthiessen tells me, that is enough.
Posted by darkorpheus on Tuesday, July 11, 2006 1 comment:

World Hum reports on the newly inaugurated railway into Tibet.

Not very positive.
Posted by darkorpheus on Monday, July 10, 2006 No comments:

On the upside of reading:

Caught DY with her husband, DT on Saturday evening - right before WW's big KTV gig (about that later)

DY and I were just chatting about how small the world is, where you keep running into people you know - and DT commented, that ironically, it's too big to meet up for a bookclub.

Oops. When we failed to read Robertson Davies, we just lost the momentum.

As for the follow-up - I guess His Dark Materials was a little too heavy for a bookclub (3 books!) DY suggested perhaps we could do Jonathan Safran Foer's Extremely Loud and Incredibly Close instead.

I winced. Not a book I want to read. Really. I rather do War and Peace - but I don't think Tolstoy's going to get a positive response from my fellow bookclub members.

Anyway, here's my plug on Involuntary Memory - it's a Reading Group for Proust. *Woooooow*

They're just warming up the gig so there should be some time to catching up on the reading. I'm interested but with my current commitment to War and Peace and other books, I wonder if I can do the 50~60 pages of Proust every week.

Wait, this means I might not make it for my own bookclub. Heh.
Posted by darkorpheus on Monday, July 10, 2006 2 comments:

Jane Smiley has a weekly column in The Guardian, where she comments on the 100 novels she has read. It's also the basis for her recent book, 13 Ways of Looking at the Novel.

June 10, 2006: The Man Who Loved Children by Christina Stead

May 13, 2006: House of the Seven Gables by Nathaniel Hawthorne

May 6, 2006: Cousin Bette and Cousin Pons by Honore de Balzac

April 1, 2006: Introduction and The Tale of Genji by Murasaki Shikibu
Posted by darkorpheus on Monday, July 10, 2006 No comments:

I hate those Copy Controlled CDs!

Have Beth Orton's Comfort of Strangers and I can't rip it to my mpeg player!
Posted by darkorpheus on Friday, July 07, 2006 No comments:

OFF TANGENT | A Lyrical Life

I've been playing a lot of Sarah McLachlan recently. You know how sometimes, like a miracle, a song just seems to be about your life?

Actually, it's quite sad - because life is larger than a song, or a book for that matter. But I can admit sometimes - it feels like it's all about you.

A friend once pointed out hoobastank's Reason is the "Story of My Life." For the reason mentioned above, I disagree. My life is larger than that song. My friend got it wrong; my Ex is NOT The Reason I want to change my life.

Rather, I realised the choices I had made were making me unhappy. I chose to change because I believe I deserve to be happier.

But I concede there are still songs that echoed the little unhappy chapters in my life. I set these songs on "Repeat" mode on my mpeg player sometimes, when the mood hits me.

This is one of them (and it's not Sarah McLachlan):

Evanescence, one of my favourite band, will have a new album out this year. It's currently slated for October 2006 release.

Album entitled The Open Door.
Posted by darkorpheus on Wednesday, July 05, 2006 No comments:

Posted by darkorpheus on Tuesday, July 04, 2006 No comments:

A has returned. She was in Germany for the World Cup with her husband. After that, they toured Europe.

A has returned with smelly cheese for yours truly. Gourmet cheesiness that is currently stinking up the office.

Ahhh...the thought that counts.
Posted by darkorpheus on Monday, July 03, 2006 No comments: