Back in July, I found out my yoga teacher, Hanoi, was coming back to conduct a series of Anusara wokshops. Since I'm now in Dubai, attending his workshop was not possible.

So my friend just sent me this note from Hanoi and her - to remind me of what's important. 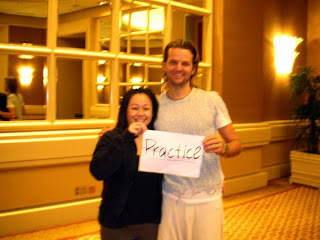 Thank you. I love you guys.

Howdy. Just uploaded some photos from Dubai on my flickr page. Please be warned there are some gruesome pictures of dead sharks.

After all this time off-line, I finally managed to catch the free wifi at the Starbucks near my apartment. My grande cafe latte is cold and I still have to catch up on my work related emails -- which have been sorely neglected for these past week.

I wish I can say things have been going well at work; it hasn't. A lot of unforeseen delays, some of which we might have worked around if the Management had listened to advice given months ago. As they say, hindsight is always perfect, and we are left with the "If only". What frustrates me now is the refusal of the Management to learn from mistakes. My old patterns are surfacing, where in a position of frustration and powerlessness, I go into a stubborn, passive-aggressive mode. They have already cut my off-day to one day a week, in spite of the standard Friday/Saturday weekends, because we're rushing for an unrealistic deadline.

My yoga practice has also been neglected, because the air-conditioning at the new apartment is so frakking cold, I wear a jacket to sleep every night. I can't turn the air-con down because the temperature control is centralised (but centralised by whom, I have no idea). It drives me crazy having to live with the cold indoors, and the heat outdoors. Waking up every morning to a freezing apartment with stiff muscles doesn't encourage me to practice. I need to find a way around this soon. Does this mean practicing on the balcony, in full view of all my neighbours and everyone else around the block? Does this mean shorts are out for yoga practice?

A lot of people are excited about Dubai. I've only been here slightly more than one month, most of it spent working, so it's unfair for me to make any fair or accurate judgement on the city. But I'm not sure if I will ever learn to love the city. It's one of the fastest growing city in the world right now, with one of the fastest growing population because of all the people coming into Dubai for work.

For me, Dubai is not like the Paris of my imagination. The City of Lights is a place imbued with a romance, an ideal. Illusion or not, some city has a soul that sings to us; we love the place before we even set foot on it. Some cities however, speak in an alien, garbled tongue. Perhaps it is our fault for the failure to comprehend - but in Dubai, I am a stranger in a strange land.

Many people come to Dubai for work, for an opportunity to cash in on one of the fastest growing cities. Some are fortunate, but many are lucky just to survive in this city where everything cost more than they do back home. The Dubai that I have seen this past month is a place drowned in overt capitalism. I believe there is another side to Dubai that I have not met. A spiritual and compassionate side - a more human side of an ancient city. Alas, that Dubai is overshadowed by its loud, vulgar brother right now.

I'm trying to make the best of my experience here, and trying to accept what the city has to offer. It has at least offered me some educational experiences, not always pleasant.

I am an ethnic Chinese with fair-skin; I have been mistaken for various races - Japanese, Korean, Indonesian, even Filipino. In Dubai, some people don't quite know what to make of an ethnic Chinese from Southeast Asia who speaks English. Since they have a lot of Filipinos in Dubai to fill the lower strata of their service industry, they often mistake me for a Filipino. There has been several incidents where my skin-colour became an issue. At local supermarket near my apartment, the cashiers are obviously more polite and obliging to the Caucasians in the same queue. I can't even ask a cashier to break my 1,000 dirham note for my purchase while there was no question asked of a Caucasian lady who did the same. During business meetings, people talked down to us because of the colour of our skin. As the racial majority in my own country, racism isn't personal, though it exists - for others. Racism is something that we are allowed to ignore back home - smug and sheltered from the reality, pretending it isn't an issue. Here, now in Dubai, I am a minority race, and the cashier down the street looks down on me.

When you travel, the racism isn't always as prominent, perhaps because I usually travel to places where I am perceived as a source of good tourist dollar; the natives usually love my fleece. Living and working in Dubai, while trying to save a few pennies, things are different. I can go back after one year, of course, but this experience has at least been enlightening, for those for whom running away is not an option.

O Dubai. You offer me much riches, though you make me earn them.

DUBAI | Moving Out and Living with a Flatmate

Things really work at their own pace here in Dubai. Try as you might, things will happen when they happen, and you just have to go with the flow. After all the delay, I am finally schedule to move into my long term apartment, nearer to the office. It will be a 2-bedroom apartment, and I will be sharing it with a colleague, H. Since the company is playing for the accomodation, I'm not complaining. Besides, I still get my own room, and it can be a good thing to have someone else around the place.

I'm okay with H. She was a little concern about sharing the cutlery and utensils with me at first, since I am vegetarian. I tell her it's fine as long as we clean the things after use. But that's more a matter of hygiene than "contamination".

I'm moving out on the 8th of October. The new apartment is barely furnished, and there will be some spring-cleaning to be done. Oh, how I look forward to sweeping, mopping and scrubbing. :(

In the midst of trying to get my work done, H and I also had to go shopping for things for the apartment. With the cost of living here, we have to really shop around for the best bargain. And H and I have different ideas of what is necessary for a living space. I prefer to work on bare minimum when it comes to furnishing the place. Pots and pans, yes, we need. But maybe not so many. We're not here forever. I conceded to H when she says she needs a doormat, because of all the sand from the shoes.

My lone contribution to the purchase of the doormat, besides the cost: "Can I just emphasize how hideous that looks?"

We have matching plates, bowls and spoons though - because I can't bear looking at ugly utensils everyday. H just rolls her eyes in disgust at how picky I am on the aesthetics on certain things.

H needs a proper bed. I'm just fine if they give me a mattress. I need a pillow, H doesn't. H wants a clean apartment, I am not as enthusiastic about the effort required to maintain a clean apartment.

Dubai has more than a hundred different nationalities living here. It is about learning to live and work with different people, learning when to compromise, when to assert yourself.

And work is going to be crazy. After all the waiting, the momentum finally seems to have built up. I will probably be offline again for the next 2 or more weeks, working overtime to rush for a deadline that I personally find unrealistic.

But we try. Meanwhile I am giving dirty looks at the broom.