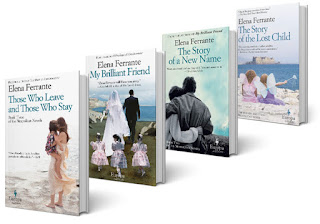 I was curious about the series of novels from Italian author Elena Ferrante last year. What kept me from purchasing the books though were the horrendous covers. Oh gawd - they look pastel and vulgar, like those dull novels about dutiful daughters, and long-suffering wives that I cannot endure.

But I did read a few pages of the first book once, and I found the writing interesting enough to want to continue. But - but - the covers. My prejudices won, and I had not ventured to read the series. There was something about holding those awful covers in my hands. I picked up the Australian version of the first book though. One is thankful for the Australian covers.

Why such bad covers? Really. Why? You would think with the phenomenal sales, the publisher could have gone with a better look.

So, I came across this essay from The Atlantic recently, and it seems the choice for the bad covers were deliberate, the intention ironic. Although, these ironic covers were so universally despised (Ha! It's not just me! Yes, while having a popular opinion does not automatically validate my prejudice, at least I am not alone in my bigotry of awful book covers), the publisher were a little concerned:

The complaints are so numerous that Ferrante’s publisher even expressed concern to Slate that “many people didn’t understand the game we we’re playing, that of, let’s say, dressing an extremely refined story with a touch of vulgarity.”

So what is the game?

...In interviews, Ferrante has said that the ambition of her writing is to make “the facts of ordinary life […] extraordinarily gripping when read,” which well captures the genius of her fiction.

It also captures the genius of her bad covers. Although the U.S. dustjackets are far from gripping, they’re wholly, unapologetically domestic. And by binding her novels with domestic images, Ferrante insists that the women’s domestic lives are as literary as any others. Her covers don’t deny the possibility that the Neapolitan novels could be construed as “women’s fiction”; they argue that her novels are “women’s fiction,” whether or not they’re compatible with modern romance. Her fiction testifies that women’s stories are important not because they’re universal, but precisely because they’re specific—because women’s experience of their “sex and its difference,” as Ferrante has described her subject, are worthy of art, and worth reading about.

The covers were chosen by Elena Ferrante herself. Ah. Author's intent. I appreciate irony, and I get the implication that our aversion to these stereotypical images is as much about our own snobbery of what "women fiction" is about. Yeah, I get that. But irony just isn't enough justification for how f-ugly the covers are. So far the covers haven't really hurt the sales, so I guess we're stuck with the ugly covers.

Everyone initially involved in the Australian edition of My Brilliant Friend – publisher, editor, marketing and publicity – was of one mind about the original Italian cover: “no”’ [source]

Posted by darkorpheus on Wednesday, July 06, 2016 No comments: