Signed up for NaNoWriMo. No one ever said it has to be deathless prose, right?

Posted by darkorpheus on Friday, October 31, 2014 No comments:

Hiatus No More! Sleater-Kinney's Coming Back!

They are coming back! Sleater-Kinney's coming back! Here's their new single, "Bury Our Friends". Their new album is scheduled to drop January next year! I'm stoked!


Posted by darkorpheus on Tuesday, October 21, 2014 No comments: 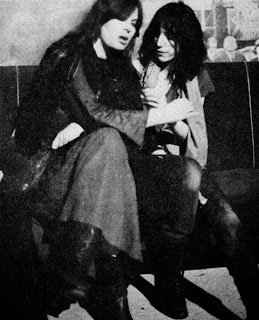 I did not know that Patti Smith and Nico knew each other. Patti Smith did not speak much of her acquaintance with the tall blonde, hipster femme fatale.

Came across this excerpt from a book on Nico recently though, where she spoke about her impression of Patti Smith, and Smith's generosity to her. It's a small human piece, but so touching.

“I had met Patti in New York, when she was a young poet on the scene. She was a female Leonard Cohen, when she moved from writing to singing, and I liked her because she was thin but strong. John Cale produced her first album, which was about heroin (Horses, 1975). Then I met her in Paris, and got to know her better. I felt like she could be a sister, because anyway she was the double of Philippe Garrel, and I liked to be together with her...

“Patti was very kind to me. Early in 1978 my harmonium was stolen from me. I was without any money and now I couldn’t even earn a living playing without my organ. A friend of mine saw one with green bellows in an obscure shop, the only one in Paris. Patti bought it for me. I was so happy and ashamed. I said, “I’ll give you back the money when I get it”, but she insisted the organ was a present and I should forget about the money. I cried. I was ashamed she saw me without money.”


- Nico: The Life and Lies of an Icon, Richard Witts

Posted by darkorpheus on Sunday, October 05, 2014 No comments:

The absurdity of my life is not lost on me. I have began to wonder about my own sanity. Perhaps this is why I decided to start a reading list for myself yesterday. I have decided I will read the works of Albert Camus - works by him, works about him. I may not read everything, but as much as possible.

So here we go - for 1st October 2014, I read The Outsider, by Albert Camus. Translator: Sandra Smith.

Posted by darkorpheus on Wednesday, October 01, 2014 No comments: