I took a break from blog several years ago. I was in another country, overworked, sometimes working 18 hours a day 7 days a week, often insomniac, imbibed too much coffee, and generally troubled and unhappy. I couldn't focus my thoughts enough, or get them to a coherent string to write. Maybe there's something to this malaise of being unable to write for a long time.

There's also been my experimentation with social media. The more I get into the various platform, Twitter, Facebook, Instagram etc, the less I write. I pretend I was generating content on the other media, but as I truly examine my posts - often, I was merely reposting other people's stuff, and not creating my own. I wasn't articulating my true inner voice. But I have a sense that to write again, I need to read, again.

So many distractions these days, from reading. Just playing on my iPhone sucks the time away. But reading is so much a part of calming the mind. Why have I neglected my friends, my books?

I picked up Patti Smith's Just Kids last night. I bought it a while ago, full of inspirations, determined to read Patti Smith's lyrical prose, and about her profound friendship with Robert Mapplethorpe, about art, about being an artist. The pages were yellow, and spotted with yellow, the result of acid reactions on the paper.I bought it, and have left it unread for too long.

I'm a few pages in. Her writing lulls me into a state of quiet. The words are simple, but taut with memories, elegant even.

Much has been said about Robert, and more will be added. Young men will adopt his gait. Young girls will wear white dresses and mourn his curls. He will be condemned and adored. His excesses damned or romanticized. In the end, truth will be found in his work, the corporeal body of the artist. It will not fall away. Man cannot judge it. For art sings of God, and ultimately belongs to him.

Posted by darkorpheus on Tuesday, August 16, 2016 No comments:

BOOKS | White Sands: Experience from the Outside World

The best things about deleting Pokemon Go from my phone was that I finally found myself reading again. Granted, I am still not reading as much as I would like to, but some reading on the bus is still better than nothing; still a lot better than wasting it trying to catch Poke stops to refill my Poke balls, and catching Pokemons. Yep, I was one of those people.

I finished Geoff Dyer's White Sands eventually. I was still one day late to return it to the library. What can you do about it, right?

The thing that caught my attention in the beginning (the Author's Note part of the book) was how he stated that the book was "a mixture of fiction and non-fiction". He explained, or maybe just stated, "The main point is that the book does not demand to be read according to how far from a presumed dividing line--a line separating certain forms and the expectations they engender--it is assumed to stand. In this regard 'White Sands' is both the figure at the centre of the carpet and a blank space on the map."

So what exactly is this book about? Well, I'm not totally sure. It's about going somewhere else, and not necessarily always somewhere geographically somewhere else. He wrote about going to China, to Tahiti, living in Los Angeles -- but along the way, he also ruminated on his childhood, thoughts on looking at certain pictures and art. I guess ultimately, this is a book about how we see: within and without.

This quote drew a nod from me, because it is possible to look at a piece of art, and not see it - not understand it. It is also possible (and it happens a lot of the time) to be somewhere and not see what surrounds us. To be talking to someone, and not be communicating. To know something, and not see them.

Or I might be wrong. Either way, it had been an enjoyable book.

Posted by darkorpheus on Monday, August 15, 2016 No comments:

Some Thoughts on a Recent Trip to Yogyakarta, Indonesia 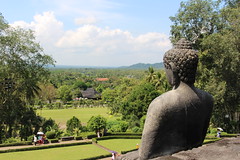 I was in Yogyakarta, Indonesia last weekend. It was a quick 4 days break - what I usually call a "mental health break", so vital to emotional and spiritual well-being. Was there any great revelations? No. Was it restful? Slightly - and I got a mild sunburn along the way too. Was it fun? It was okay.

I used to speak of travel as the great spiritual journey, wandering to discover oneself. But slowly and gradually, I have come to accept that the journey itself is slow to unfold. Between the moments of great adventure is a lot of boredom and discomfort in between. You have to get over the dull, painful parts to get to the fun parts - and you probably only appreciate it later (or sometimes, not at all), when you look back.

Was Yogyakarta one of those things that I will look back and appreciate? Maybe. I was told by people who went there a few times that the best way to get around was to hire a driver. However, I was curious about the local buses that brought you to Borobudur, and Prambana - the two famous UNESCO Heritage sites in Yogyakarta. Against the advice of the more experienced, I tried taking the local buses. It was comfort - but I did manage to get seats during my journey. The trip to Borobudur took more than two hours each way. I was charged more than the locals, because I was a tourist. But was it worth it? I felt just that little bit proud of myself for taking the bus in a foreign country. Was it a big deal? Yes, to me. Because while I would probably never admit it to friends - I was afraid.

That was the key to why traveling is so important to me; I am afraid most of the time. Yet, little by little when I do the things that scare me, a mundane thing like taking the bus - in a foreign country, makes me feel just that little bit braver.

Travel has constantly reminded me of the kindness of strangers. I travel alone, usually. It's moments like these, where taken out of the familiar, and forced to pay attention, I noticed the little things that people do for me, like letting me know there's a free seat on the bus, giving me advice about the local bus routes, letting me know where the public restrooms are. Minor things yes, but I find myself being grateful - more grateful than I ever was back home, for these little gestures. The only difference lies in my physical location, and my attitude to them.

So, my advice is: travel. It nudges you into little things. After a lifetime of travel, you will look back, and it will be worth it. Unless you close your heart to all things beautiful and profound, then all you will have are cheap souvenirs and maybe even bitter memories of people cheating you of your tourist dollars.

Posted by darkorpheus on Friday, August 05, 2016 No comments: