I was drawn to Albert Camus because he looked so cool in his trenchcoat, because the Cure wrote a song inspired by one of his books (The Outsider), because he and his pug-ugly friend Sartre were existentialists (which seemed related, somehow, to the trenchcoat).

Probably one of the most honest reason for reading Camus.

Posted by darkorpheus on Monday, September 29, 2014 No comments:

This is probably one of the better book trailers I have seen in a while. I'm definitely going to get the Thug Kitchen Cookbook

Posted by darkorpheus on Friday, September 26, 2014 No comments:

I promised myself to write more often, but truth is, these days I am just trying to find more time for sleep. So here's a piece from Neil Gaiman, on Terry Pratchett and the inner rage that drove his writings. They have been friends for a while now, even wrote a book together, which was hilarious. The worldknows about Pratchett's decline because of early on-set Alzheimer's. As a fan of his books, this saddens me, because it's a disease that will gradually strips one of their dignity before the end.

This essay by Gaiman shares something about Pratchett that I have always believed in - that there's something serious and earnest behind his books.

Terry looked at me. He said: “Do not underestimate this anger. This anger was the engine that powered Good Omens.” I thought of the driven way that Terry wrote, and of the way that he drove the rest of us with him, and I knew that he was right.

There is a fury to Terry Pratchett’s writing: it’s the fury that was the engine that powered Discworld

This rage that Gaiman describes, seems to me a symptom of a sense of injustice; things should be better, ought to be better. People should know better, ought to do better - but we often fail. I see it in the moments of sad acceptance in Granny Weatherwax and Tiffany Aching - characters who have enough wisdom and courage to see the truth about human nature, yet somehow found something precious within themselves to continue to care. I always believe that people gets truly angry because they care.

This is why I love Pratchett's writings: the moral outrage in his writings that's cleverly disguised as "low-brow" humour. The humanity and heart in them.

I also have a parent at home with early on-set Alzheimer's. I can't bring myself to wish that he gets better, because I know that's an empty hope at the moment. It will only get worse. We are losing one of our greatest mind. That is a tragedy.

Posted by darkorpheus on Thursday, September 25, 2014 No comments:

My Own Magical Reading

It's a warm Sunday afternoon right now. I'm out at a local cafe with a book and a cup of teh cino (frothy milk tea). I picked up this title yesterday from the bookstore - Tolstoy and the Purple Chair: My Year of Magical Reading. It's a reading memoir, where Nina Sankovitch decided one day to stop running from the grief in her life, since her sister's death - and just read. Just stay still and read and let the books soothe her.

It felt like a good plan, something that I am dying for myself. The title itself reminded me of Joan Didion's The Year of Magical Thinking - and perhaps it was meant to allure to that, both books coping with loss and grief in their own way.

We all come to books for our own reasons. Right now, I need my old friends for some comfort. Today I opened up a new Moleskine cahier (I have lots of them around the house). I wrote down the titles of the books that I still have in progress, wrote down the date I started on them, similar to this blog, and started my Reading Journal again. I can only write again when I start reading again. This much I know. For me to read again, my mind has to be at peace.

So, for now, some milk tea and a book.

This is my own magical reading place. 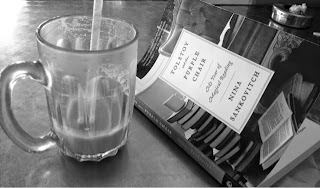 Posted by darkorpheus on Sunday, September 21, 2014 No comments:

Patti Smith - People Have the Power!

Patti Smith at Riot Fest, performing "People Have the Power". Around 6:30, she remind us, "We do have the power! Our governments, our corporations would like us to feel defeated, but we have it with our numbers if we use it. Don't forget it!"
Posted by darkorpheus on Wednesday, September 17, 2014 No comments: