Running to Train Myself

“If you’re trying to defeat the human spirit, marathoners are the wrong group to target.”

I read this quote on Facebook soon after the Boston Marathon bombing. Since I've been running, I am only feeling the amount of discipline and will it takes to train for a marathon. To complete 26.2 miles in the Boston Qualifying time takes more than running 26.2 miles. It takes years of focused practice, who knows how many thousands of miles ran - not to mention the aches and pains that came with it all. Marathon runners take all of this in, and they still continue.

This is why I want to continue running. This is a training of will. If I can do this, I know I can do anything. I'm tired of giving up. Tired of not following through. Tired of letting myself down.

Posted by darkorpheus on Monday, April 29, 2013 No comments:

Saw the News about the Boston Marathon Bombing Today

I was up around 4 am this morning. I saw all the posts on Facebook about the bombing at the Boston Marathon. I went to check on a friend who lived in Boston (she's ok). Checked in with my running group, and there's a lot of emotions running about the bombing. Just last night, some of the girls in my running group were talking about making the qualifying time for the Boston Marathon.

So, I did what felt right this morning - I went out for a 3 miles run. I try to keep the people who were affected by the bombing in my thoughts as I run - because things like these are not supposed to happen at the Boston Marathon. Because the Boston Marathon is about running - and your politics, skin colour, religion and any other differences is not supposed to matter there. Then I found my thoughts going out to the people I care about, and I wondered if they are ok. And I thought about the people that I care about - but we no longer speak, and I wished we could speak again so that I would know if they are okay.

More than anything else, I want people to be ok.

Posted by darkorpheus on Tuesday, April 16, 2013 No comments:

Picked this up today

Went to the bookstore today. 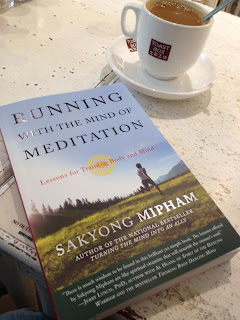 Posted by darkorpheus on Sunday, April 14, 2013 No comments: