Everybody's got a story to tell: Keanu Reeves 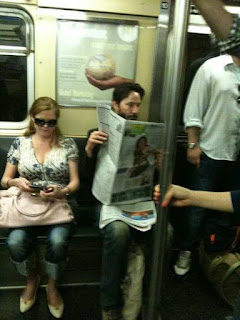 This guy reading the newspaper on the subway is Keanu Reeves.

He was from a problematic family. His father was arrested when he was 12 for drug dealing and his mother was a stripper. His family moved to Canada and there he had several step dads.

He watched his girlfriend die. They were about to get married, but she died in a car accident. Before that she had lost her baby. Since then Keanu avoids serious relationships and having kids.

He is one of the only Hollywood stars without a mansion. He said: 'I live in a flat, I have everything that I need at anytime, why choose an empty house?'

One of his best friends died by overdose, he was River Phoenix (Joaquin Phoenix's brother). About the same year Keanu's father was arrested again.

His younger sister had leukemia. Today she is cured, and he donated 70% of his gains from the movie Matrix to hospitals that treat leukemia.

On one of his birthdays, he went into a little candy shop, bought himself a cake, and started eating alone. If a fan walked by he would talk to them and offer some of the cake.

He doesn't have bodyguards. He doesn't wear fancy clothes.

When they asked him about 'Sad Keanu', he replied: 'You need to be happy to live, I don't.'"

Everybody's got a story to tell. Sometimes it's a really sad one, like his.
Posted by darkorpheus on Monday, June 18, 2012