Saw "Flightplan" and "Saving Face" last Sunday. In spite of the iconic status Jodie Foster represents for me, I have to admit I was more charmed by director Alice Wu’s more lightweight movie. SPOILERS AHEAD 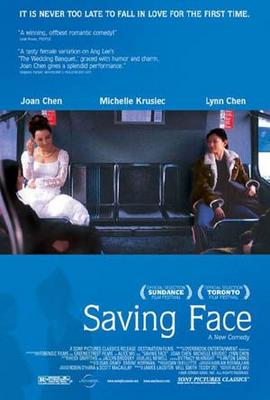 
"Saving Face" is a simple fare done very well. It is a rare bilingual movie where almost all the Chinese actors speak fluent Mandarian Chinese – and is better for it all. It smoothes over the awkward Mandarin of the two lead actresses Michelle Krusiec and Lynn Chen. In fact, it works to position them outside their Chinese-American community linguistically (and by implication, sexually). The mother-daughter relationship between Ma and Wil works with Ma speaking only Chinese while Wil responds mainly in English. The dynamics of the relationship is so effectively communicated by language.

The story goes like this: Wilhelmina Pang (Michelle Krusiec) is a capable Chinese-American surgical resident living in Flushing, New York. (Her boss predicts she will make Chief of Staff by the time she’s 40.) Her work keeps her busy, so her widow Ma (Joan Chen) keeps trying to fix her up with eligible young Chinese men every week at the Chinese social dances. Wil goes along with it, albeit with great reluctance. Not just because of the lameness of your mother trying to fix you up, but also because Wil is a closeted lesbian. (At least closeted from her Chinese community. Everyone else seems to know) Wil’s the kind that wears men’s shirts with sensible shoes, which Ma disapproves. But Grandma is cool here, as Grandma remarks, "Just like the pair I wore during the Cultural Revolution." "Very practical and durable," she adds. Anyone who ever had your mother complaining about your dress sense will warm to Grandma immediately. (Although on a later thought: how flattering is it to have fashion sense that dates back to the Cultural Revolution?)

As Wil braces herself for another torturous night at the social dance, she meets Vivian (Lynn Chen), a dancer with the New York City Ballet. It was mutual attraction for both. They meet again later at the hospital where Wil works. It turns out that Vivian is the daughter of Wil’s boss. Ah. Coincidence.

The romance between the two young women is handled with a lightness that renders their attraction believable. Michelle Krusiec shuffles around with a shy self-consciousness that’s oddly endearing. Her eyes are often hapless at the unfolding of the drama around her, like some helpless hamster. You are drawn to Wil’s gentle vunerability just as Vivian was. And Lynn Chen is the stronger of the pair, with her pretty babydoll features, and the unmistakeable mischief just gleaming out of the corners of her eyes and fluttering around her playful smiles. She’s the kind of girl that catches your eyes in a crowded room. (Okay, she’s the kind of girl that catches my eyes in a crowded room.) Lynn Chen plays Vivian with a self-assured charm, first smiling sweetly across the dance hall at the pretty little surgeon with the ponytail, later making a pass at Wil at the candy machine. She totally disorientates the young doctor.

As the young lovers slowly sidestep their way towards one another, a tango plays on the soundtrack and Wil returns home one night to find Ma at the steps outside her apartment. Turns out Ma is pregnant, and refuses to name the father. Grandpa found out about Ma’s condition from one of his old student. Now everyone knows.

So Grandpa threw Ma out – unless she gets married (apparently it doesn’t have to be the baby’s father) or "proves immaculate conception."

The chaos of juggling your pregnant mother and a new lesbian romance just gets too much, and Wil resorted to trying to find Ma a husband. In the midst of trying to get Ma ready for her first date, there was a touching moment when Wil observed her mother up close. She stares, as though seeing Ma for the first time. Ma, a bundle of insecurities, asks if there was anything wrong with her face.

"You’re beautiful," she tells Ma. And yes, Joan Chen is beautiful in this movie.

All her other films have never prepared me for this comedic side of her. Joan Chen’s Gao Hwei-Lan is funny because she is entirely believable as the character she plays. You laugh because it’s so touchingly familiar. Even as she’s s/mothering Wil, she’s also a sheltered child experiencing freedom for the first time in 48 years. In one scene she wanders into a video store asking for Chinese videos. As she scans the shelves, we glimpse the titles "The Last Emperor" and "Joy Luck Club." It’s the kind of in-joke that brings a smile to your face. Later, she meandered onto the shelves for porn videos – and we see only her eyes from above the video rack. The eyes spoke eloquently of the innocence of this grown woman who’s fascinated by the forbidden.

When Ma finally reveals the father of her baby, it wasn’t really much of a surprise. Wil asks her, "Why did you put us through all these?" Ma replies that she has never dated in her life, and she just wanted to feel how it’s like to get out. And most importantly, she needed the father (of her unborn baby) to declare his feelings for her in front of everyone. She needed him to be sure of his feelings for her. While there’s something of a petulant child in this, what she yearns for is so achingly human. She wants her love to be stronger than fear. Straight, gay, old and young, we want our love to declare itself in front of the world.

Wil couldn’t learn this from Ma soon enough, because Vivian, tired of waiting for Wil all the time, signs up for a 4 years stint with the Paris Opera Ballet. At the airport, Wil pleads with her girlfriend to stay. And Vivian asks this of her: "Kiss me in front of everyone here." Wil couldn’t. And she loses the girl she loves.

The movie poster has Joan Chen and Michelle Krusiec seated a little apart from the other. I found the image odd at first. I wondered why Lynn Chen was not included in the poster. After the movie I realised I was misled by my expectation of what "Saving Face" was about. It wasn’t a just a lesbian romantic comedy as I had presumed. I fell in love with "Saving Face" because the heart of the story is Ma and Wil – it is definitely a love story – between a mother and a daughter.

After the movie I visited the website for "Saving Face" and came across Alice Wu’s "Director’s Notes":

"I wrote SAVING FACE as a love-letter to my mother. The character of Ma begins the movie as a woman with all major decisions in life seemingly made; at 48, she has lived a proper life and is now essentially just living to die. That she ultimately breaks with tradition and lives on her own terms is a triumph I wanted my mother – and the world – to see. I suppose if there is one thing I am trying to say with the film, it is that no matter who you are – Asian or black, gay or straight, young or old – that everyone basically wants to love – and that love can start at any point in your life that you want it to. I made SAVING FACE because I wanted my mother to know that it was never too late to fall in love for the first time. And that it is not by doing things right, but by sometimes getting them wrong, that we launch the journey that allows us to come into our own."

It's the kind of thing that makes you smile when you read it. "Saving Face" is Alice Wu's first film. It isn't a great arthouse movie, but it's a lovely, personal film. Chekhov identified compassion as one of the six characteristic vital to good writing. I think Alice Wu got it pat down.

Some background on director Alice Wu: She graduated from Stanford University with Bachelor and Masters degrees in Computer Science. She was a software designer with Microsoft until the day her script for "Saving Face" won an award.

In the film, Vivian is a talented ballet dancer. But despite the disapproval from her father, she has been venturing into modern dance , simply because, "it is more ... expressive."