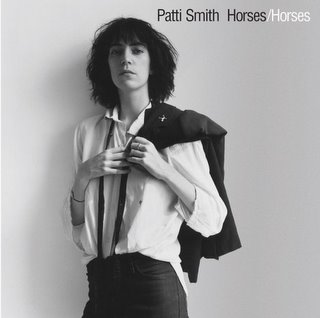 Her music invokes Burroughs, Blake, Rimbaud, Bob Dylan and the Rolling Stones; Patti Smith is the Poet Laureate of Punk Rock. Her iconic debut album, Horses is now out in a 30th Anniversary version.

["Three chord rock merged with the power of the word" ]

The first time I encountered Patti Smith's work was in a bookstore. It was Tower Books before it closed. In the poetry section was a slim square volume. Many of the photographs were by Robert Mapplethorpe. Text was by Patti Smith.

It was The Coral Sea, her small book of tribute to her late great friend, Mapplethorpe. She addressed the reader:

The first time I saw Robert he was sleeping. I stood over him, this boy of twenty, who sensing my presence opened his eyes and smiled. With few words he became my friend, my compeer, my beloved adventure.

When he became ill I wept and could not stop weeping. He scolded me for that, not with words but with a simple look of reproach, and I ceased.

When I saw him last we sat in silence and he rested his head on my shoulder. I watched the light changing over his hands, over his work, and over the whole of our lives. Later, returning to his bed, we said goodbye. But as I was leaving something stopped me and I went back to his room. He was sleeping. I stood over him, a dying man, who sensing my presence opened his eyes and smiled.

When he passed away I could not weep so I wrote. Then I took the pages and set them away. Here are those pages, my farewell to my friend, my adventure, my unfettered joy.

I liked what Patti Smith wrote, this tenderness and loss. But back then I was an impoverished student on an allowance. So I did not get the book.

A few years later I read about the album Horses. It was an article in The Rolling Stones magazine, and Michael Stipe raved about Patti Smith.

I picked up the CD, listened.

One song caught me, the opening lines, Patti Smith in her signature low, deep drawl:

Jesus died for somebody's sins
But not mine
Meltin’ in a pot of thieves
Wild card up my sleeve
Thick heart of stone
My sins my own
They belong to me. Me

I became a Patti Smith convert that night. I learnt what it meant to be punk.

The album cover of Horses (the picture above) was taken by Robert Mapplethorpe. I have framed this picture in an IKEA photo-frame. It sits in my room, like an icon, an alterpiece.