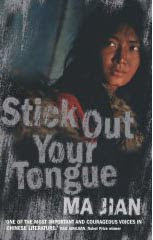 I first learnt of Ma Jian when Red Dust came out in its English translation several years back. Red Dust is the travel memoir of Ma Jian's vagabonding across China in the 1980s. In those days, he kept his hair long, read translations of Western literature, wrote, painted, had late-night parties with his bohemian friends where they played pop music from their cassette recorders through the night. Ma Jian is the typical disillusioned romantic of post-Mao China — discontented with the emptiness of the Communist society, wanting more — yet powerless. For his views and behaviour, he was suspended from his work unit — pending investigation by the authorities. In a state of existentialist despair, he packed his bag (along with a copy of Walt Whitman) and made a journey on foot to the outer reaches of China. He lived among the indigenous Chinese tribes and ventured into the wildest regions of Tibet. He had hoped Tibet could provide him with a deeper insight into the Buddhist faith in the midst of the inhuman society he was living in. Ma Jian later returned to Beijing spiritually exhausted; the trip brought him not the peace he desired, but knowledge of a different kind. He locked himself up in his one-room shack and wrote feverishly. Stick Out Your Tongue was the first book that came out of his experience. He wrote:

Through the stories that took shape, I wanted to express my confusion and bewilderment, my sympathy for the marginalised and dispossessed, my frustration with blind faith, and my distress at the losses we incur on the march to so-called 'civilisation'. I wanted to write about Tibet as I had experienced it, as both a reality and a state of mind. I let my guard down and wrote without thought of what the repercussions might be.

The subject matter of Stick Out Your Tongue led the Mainland Chinese government to denounce him, and the book was subsequently banned in 1987 as a work of pornography and as an example of bourgeois liberalism. (This is probably why I could not locate a Chinese version of the book.) The editor of his book was sacked and many of his friends were brought in for questioning. Thankfully by that time Ma Jian was living in Hong Kong. His friends advised him to stay in Hong Kong — he risked imprisonment should he return to Beijing.

So, is Stick Out Your Tongue an accurate portrayal of Tibetan life? I wouldn't know. Perhaps like Marco Polo in Invisible Cities, all the tales of the fantastic cities are really about Venice — and Ma Jian is really writing about the China that exiled him.

Ma Jian wrote from the truth of what he felt, and that came from a place of disillusion and despair that was trying to make sense of what he went through. Perhaps this explains the gothic nature of his stories. Stick Out Your Tongue will shatter your picture-perfect vision of an idyllic Tibet with the rolling pastures and peace-loving natives.

In one story, a Chinese writer travelling through Tibet witnesses the sky burial of a woman who had died in childbirth. She was shared as a wife between two brothers. In another story, the narrator shares a tent with a Tibetan man, who later reveals how he had slept with his mother when he was sixteen, and conceived a daughter with her. Later he sinned with the daughter, who then ran away. He has sold his entire herd of yaks and sheep, donated the proceeds to a monastery and was on his way to Gangdise Mountains to pray, and to wash his sins away in Lake Mansarobar. Then there is the story of a ritual cup made from human skull that the narrator had bought on his travels. The skull belongs to a female Living Buddha who died during her initiation.

The stories are disturbing, violent, perverse and mystifying in spite of it all. Ma Jian has included an Afterword to this translation. In it, he wrote:

In the West, I have met many people who share the same romantic vision of Tibet that I held before I visited the country. The need to believe in an earthly paradise, a hidden utopia where men live in peace and harmony, seems to run deep among those who are discontented with the modern world. Westerners idealise Tibetans as gentle, godly people untainted by base desires and greed. But in my experience, Tibetans can be as corrupt and brutal as the rest of us. To idealise them is to deny them their humanity.

I visited Tibet last year and I returned with mixed feelings. I had read up on the country before I left, and I thought I had "educated" myself against the over-idealisation of the country. A friend once remarked with a longing in her voice, that Tibet was a beautiful pacificist country — because of the Buddhist culture permeating Tibetan life, and that was why it could not resist the Chinese invasion. At that time I had been disdainful of her romantic misconception about Tibet, and had corrected her, stating that like most countries that fell to foreign aggression, the fall of Tibet was due to the political incompetence of her leaders.

Yet we all hold our illusions in different ways, and some more subtle and hidden than others. I had my own romanticised Tibet in my mind's eye, only I was not yet aware of it then. A friend asked me, if I have gained any insights after my Tibetan travels. I did not really know how to answer her. I saw poverty, corruption and a savageness I was unprepared for. We were locked in a temple by an arrogant old man because we would not pay him when he demanded tips. I saw wolf-like cunning in the eyes of young boys half my age and I was afraid of them.

What an interesting experience you've had and the book sounds fantastic.

Thanks, Stefanie. I still can't say if I had enjoyed my trip to Tibet though.

Good for people to know.