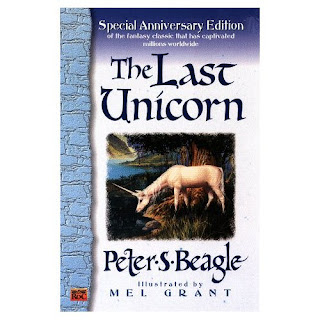 I was hoping to read The Last Unicorn for Carl. V's much anticipated Fantasy/Fairy Tale Challenge. But latest news is the challenge will only kick off next week, and I wouldn't be in town. Well, maybe next year, Carl. Or I'll be back for the later part of it.

But hey, I don't need an excuse for reading a book. For those of you mature enough to recall the animated film adaptation of The Last Unicorn - this is the original novel on which the picture drew from. Peter S. Beagle himself wrote the script and it remains one of the most memorable animated films of my childhood - right next to The Flight of Dragons. My reading of the novel is overlaid with my memories of the animated film.

I would like to say that I was a precocious child and recognised the subtle meanings in the story of The Last Unicorn ― but I'm not. Reading the novel now as an adult, I realised for the first time how self-aware the story really was. It is more than a story about a unicorn on a quest for her kind. It is a meditation on our idea of fairy tales itself.

The story starts off with the unicorn one day overhearing a couple of hunters talking. The hunters speak of how there are no more unicorn in the world. It was then that the unicorn realises she was the last unicorn in the world and she sets out to find her own kind. Later a butterfly reveals that the Red Bull has taken the unicorns, and so she sets to look for the Red Bull. On the way she was kidnapped by the people at the Fortuna's Midnight Carnival ― which claims to show mythic creatures from all around for a price. Mommy Fortuna uses illusion to disguise ordinary animals as mythic creatures ― and the crowd came face to face with the last unicorn in the world, and they could not recognise her; they see only the illusion.

Working for Mommy Fortuna is Schmendrick the Magician, who is totally inept. His magic never works the way he wants them to. His master, Nikos the great magician decides to place Schmendrick under a curse - that he shall never age or die until he comes to his power. The last unicorn did not believe him at first when he offered to help her escape, but Schmendrick tells her:

"It's a rare man who is taken for what he truly is," he said. "There is much misjudgement in the world. Now, I knew you for a unicorn when I first saw you, and I know that I am your friend. Yet you take me for a clown, or a clod, or a betrayer, and so must I be if you see me so. The magic on you is only magic and will vanish as soon as you are free, but the enchantment of error that you put on me I must wear forever in you eyes."

This is the failure of our lives - the failure to recognise truth. We lost the ability to recognise magic that laid in front of us clear as day. Ours is the "enchantment of error." Perhaps Schmendrick explains it better when they finally found the rest of the unicorns, captured by the Red Bull for King Haggard:

That is the problem of the world ― we stopped looking for magic long ago. But there are the very few who never cease to look, and maybe they are the saddest of all. I remember the character of Molly Grue from the film long ago. Molly ran off to join Captain Cully when she was young, believing in the fairy tale of Robin Hood and imagining herself a sort of Maid Marian. Reality was less pretty. She grew older, jaded and tired. Then one day her path crosses Schmendrick and the unicorn. Her response when she finally saw the unicorn stayed with me vividly:

But Molly pushed him aside and went up to the unicorn, scolding her as though she were a strayed milk cow. "Where have you been?" Before the whiteness and the shining horn, Molly shrank to a shrilling beetle, but this time it was the unicorn's old dark eyes that looked down.

Molly laughed with her lips flat. "And what good is it to me that you're here now? Where were you twenty years ago, ten years ago? How dare you, how dare you come to me now, when I am this?" With a flap of her hand she summed herself up: barren face, desert eyes, and yellowing heart. "I wish you had never come. Why do you come now?" The tears began to slide down the sides of her nose.

"She would be." Molly snifed. "It would be the last unicorn in the world that came to Molly Grue." She reached up then to lay her hand on the unicorn's cheek; but both of them flinched a little, and the touch came to rest on the swift, shivering place under the jaw. Molly said, "It's all right. I forgive you."

There are the dreamers that continue to look for the magic and the miracle. And what happened to Molly Grue was that even as she grew old and bitter, a bit of her innocence still remained ― cynicism is often the disillusionment of innocence. But why did the magic not come into her life in her youth, when it might have meant something? All we can do is to accept the gift when it comes, even if it may be late.

Schmendrick, Molly Grue and the last unicorn finally came to Haggard's castle to look for the Red Bull, which holds the key to where are all the unicorns. But the Red Bull finds the unicorn first, and he pursues her. To save her, Schmendrick tries his magic, and transforms her into a beautiful woman. And because this is a fairy tale, we have a Prince, Lir ― King Haggard's adopted son ― who falls in love with her. He becomes the Hero, and the unicorn woman become the Princess. So the story is staged, the cast filled for a quest, a romance.

At the end all is fulfilled. The unicorns are saved, the castle of Haggard collapsed, Schmendrick came to his powers and and the armour of ageless immortality fell from him; the unicorn returned to her original form. But unicorns are immortal and therefore cannot cry or regret. The time the unicorn spent as a human woman has changed her, so that she will always have one regret.

So the story ends. Peter S. Beagle told a beautiful, intelligent story and what it says about the magic of our lives is tremendous. It is also a meditation on stories and the part we play in shaping the stories of our lives.

But as I researched the story online, I came across how Peter S. Beagle was never paid what he was promised for the movie adaptation of The Last Unicorn. He is still in a legal dispute over the royalties and screenwriting fees. So, to help out the writer a little, here is the statement from Conlan Press:

On February 6, 2007, Lionsgate Entertainment is releasing a special 25th Anniversary DVD of THE LAST UNICORN. This new edition is a huge improvement over the old one. It is digitally remastered so it looks great and has 5.1 audio, it is widescreen instead of fullscreen, it has much better packaging, and it comes with special features, including a video interview with Peter. Best of all, Lionsgate has agreed to let us sell copies of the DVD through Conlan Press, and more than half of each sale will go straight to Peter and his projects. If you plan on buying this DVD, please buy it here — because Peter will get nothing from copies sold through any other outlet.

I need to put this on my list. Great review, Orpheus. I will keep in mind what you've said about the DVD!

Thanks, it's truly a beautiful tale. Have fun with Carl's Challenge. I know you're all stocked up for it.

You need to read the short story "Two Hearts" to finish the rest of the story. I found it in "Fantasy & Science Fiction" magazine Oct/Nov 2005.

I don't know if he's published it anywhere else though. It's what happens later, when heroes get old. It has to do with when the unicorn lets the harpy go at Mommy Fortuna's carnival. Promises are kept, and you can never run from anything immortal.