Dara Torres Is Back with a Book and More

You know Dara Torres. She was the 41 year old Olympic-class swimmer, and mother of one. She competed in five Olympics, set 3 world records, and won 12 Olympic medals. In the 2008 Olympics, she missed the gold medal for 50-metre freestyle by 1/100th of a second. Did she moan and cry about it? No. She took it with good grace and a self-deprecating humour. This is the mark of a real champion; it's not just about winning the gold. It is also how you go about winning, and how you behave when you don't.

Did we think this will be the last of Dara Torres? No. According to this interview, Torres is training for the World Championship this July. She also has a book coming out this April - Age Is Just a Number - written with Elizabeth Weil. 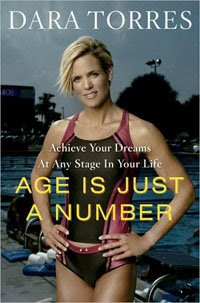 I admit I geek out when I talk about Dara Torres. She captures my imagination because she is the kind of inspiration I want in my life. I want to see more stories like Dara Torres's - stories that tell me - with enough willpower and perservance, we can overcome the limitations imposed on us.

Well, that and the fact Dara Torres looks really good.

Posted by darkorpheus on Monday, February 23, 2009

I love Dara Torres, too. I am SO going to read that book!