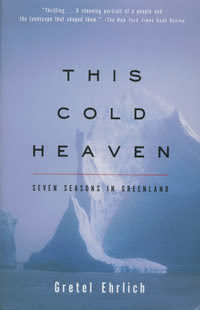 I'm in the middle of This Cold Heaven, a chronicle of a sort of Gretel Ehrlich's experiences in the Arctic. It is ironic, because while I absolutely abhor cold weathers, I find myself transported by tales of ice and cold.

This Cold Heaven is the kind of book that should be read somewhere warm and cozy, because the landscape Ehrlich writes about is chilling and brutal, yet resplendent in its stark beauty. There is a sense of much laughter and joy among the habitants of Arctic Greenland, but always there is the reminder of famine and starvation, of horrific deaths and even cannibalism. It's a difficult life, and one has to admire Ehrlich for her undertaking.

The reason Ehrlich came to her Arctic journey is also interesting. One day while she was near her Wyoming ranch, Gretel Ehrlich was literally struck by lightning. She survived the accident, and she wrote A Match to the Heart as a chronicle of that experience. It left her with a heart condition where she found it difficult to go to an altitude where she felt comfortable. So she went to Greenland, because she learned that treeline "can be a factor of latitude, not just altitude".

Greenland seems like an extraordinary place, with 95% of its surface just ice. Time seems unreal too, divided into 4 months of dark, 4 months of light, and 2 seasons of twilight ― "when the sun hangs at the horizon as though stuck between two thoughts."

Imagine watching the last sunset in October. The next time you see the sun again will be in February. That's how is it in the Arctic. Time is not measured by hours and seconds, and our biological clock is not programmed for the extended light and darkness.

The Greenlanders know of Perleroneq ― Arctic hysteria. It sometimes break out as the darkness came on and dogs as well as people might foam at the mouth and try to kill bystanders or themselves. Some reports that simply petting the dogs relieved them of their anxiety. How does one treat the afflicted humans though?

And so it is amazing that Gretel Ehrlich could spend 7 years (back and forth) on her Arctic peregrinations. While she traveled she also read the writings of other Arctic vagabonds and travelers. Among them is the Danish-Inuit explorer, Knud Rasmussen, who is something of a national hero. As she wrote: "Somewhere in my wanderings the present-day narrative spilt open to include his notes as well as my own." Rasmussen is the father of Eskimology, and his expedition notes led to a better understanding of the world of the Inuits unimaginable to us.

Ehrlich declares the Inuits (the world itself means "human being") the real heroes of Greenland. They were the first explorers and inhabitants, and they had the savvy and intelligence to adapt and thrive in the harsh climate.

The complexities of ice had taught the hunters to reconcile the imminence of famine and death with an irreverent joy at being alive. The landscape itself, with its shifting and melting ice, its mirages, glaciers, and drifting icebergs, is less a decription of desolation than an ode to the beauty of impermanence.

Beautiful, isn't it? The demands of survival meant fierce individualism is out of place among them. The group matters more. Inuit life works on a system of natural communalism. Ehrlich herself witnessed the generosity of such a life:

In Greenland I made it a practice to travel alone, never knowing quite how I would get from one place to another in a country of no roads, where solitude is thought to be a form of failure. I made my way alowly, with no common language and the usual Arctic weather-related delays, by dogsled, skiff, fishing boat, helicopter, and fixed-wing plane. The blessing of such awkward movements was that the locals took pity on me: I was passed from friend to friend, village to village, town to town, and slowly climbed the icy ladder up the west coast to Avannaarsua―the far north.

But the system of survival also has its flip-side. In time of famine, Darwinian rules of the fittest meant whoever was able to contribute to survival, not take from it. The group matters more. Rasmussen told the story of Miteq, a Inuit, who had encountered bad luck and his family was beginning to starve. Miteq and his wife sealed all but one of their children in a hut, and rolled a stone across the entrance. They then harnessed the dogs and drove away. But things did not improve and they soon were forced to abandon their final child. The couple soon made camp, but found that they could not live with themselves or other people, and they moved elsewhere. They eventually killed themselves.

There are plenty of these horror stories. Rasmussen collected their tales, and together they form a composition of a rich culture that lived with a constant awareness that death and starvation stood closely at behind, waiting.

But most of all, I am enthralled by the saying of a Caribou Eskimo, who once told Rasmussen:

All true wisdom is only to be found far from the dwellings of man, in the great solitudes; and it can only be attained through suffering. Suffering and privation are the only things that can open the mind of man to that which is hidden from his fellows.

Rasmussen took this to heart. I guess Gretel Erhlich did too, as she quoted this passage twice in the book.

One summer, on her way to an island 50 miles northwest of Uummannaq, the airline lost her luggage. With only the clothes on her back and her rucksack of books, she proceed anyway. She traveled several days from hot to cold climate, on planes, helicopters, benches and boats ― with nowhere to bathe, nothing to change into, and the clothes she was wearing souring. On the verge of sleep, she read something from the writings of artist Rockwell Kent:

See me liberated by the blessedness of the disaster from the confinement of the boat, shorn of property, stripped of clothes, wandering, an unknown alien-beachcomber in a generous land.

It is easy to go to places like Bali, Turkey or Italy these days and call it an adventure. It takes another kind of courage to throw yourself at the extreme edges of the world like the Arctic ― as Gretel Ehrlich did. I wondered at first if it was a kind of death-wish she had. She seems almost wilfully independent. At one point she was supposed to meet her interpreter, whose flight has been delayed and then was nowhere to be found. She loses her luggage, but she continues. In situations like hers, most people might have cancelled their trip, or waited. She went on ahead, a stranger in a brutal climate. (Later she was arrested, even suspected of being a Russian spy.)

There is an open fearlessness in her, though she appears unconscious of this characteristic of herself. Is it because things change when you survive a lightning strike? When you stand at the verge of death and return, the world becomes a little less scary? I wonder. Perhaps I would like to believe so. Ehrlich's peregrinations remind me of the wanderings of Zen monks through the ages, though I suspect none of them went so far to the Arctic North. She is remarkable, though quietly so.

Further Information: Gretel Ehrlich is currently travelling with the year-long Ukiivik Expedition, sponsored by the National Geographic Expeditions Council. They will travel across Arctic Alaska, Nunavut, Greenland, Sapmi (Lapland), as well as western and eastern Siberia. A book, Farthest North: The End of Ice, is supposed to be published by National Geographic. Their progress is also supposed to be updated at: http://www.point-hope.com/ ― but there hasn't been any updates since February 2007.

i cannot stand the cold as well, however, i am fascinated by the obscenely cold and icy places. i have a secret wish to visit antarctica someday to see the penguins and polar bears and ethereal icy landscape.