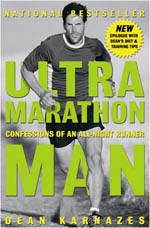 One night, Dean Karnazes was celebrating his 30th birthday. In a moment of existential crisis, he picked up his running shoes and ran. He ran for seven hours straight that night, covering 30 miles. In the morning, he finally stopped running and he called his wife to come bring him home. He was exhausted but something within him was transformed:

In the course of a single night I had been transformed from a drunken yuppie fool into a reborn athlete. During a period of great emptiness in my life, I turn to running for strength. I heard the calling and I went to the light.

It sounds almost woo-hoo, yet the achievement of the Ultramarathon Man is very real. Among the races he had done:

What comes through is a lot of pain. Oh, the pain. Yet with the pain is a message that is almost beautiful.

Dean Karnazes used to run long distance when he was in school. He tells us about the running coaches that inspired him. The first was Coach Jack McTavish, who according to legend could do more push-ups, sit-ups and pull-ups than anyone in his platoon. He taught Karnazes that "[i]t's supposed to hurt like hell." That unless you're making extraordinary effort, you're not working hard enough.

In junior high he met long-distance coach Benner. Karnazes loved this man, who respected and cared for his runners. It was Benner who taught Karnazes, "Don't run with your legs. Run with your heart." For Karnazes, the first half of the running is with the body, the latter half is done with the heart.

During his first Western States run, he met an Indian at the aid station at Ford's Bar. They exchanged words, and then the Indian chief said to him, "Pain is the body's way of ridding itself of weakness."

At times it seems Karnazes is almost masochistic in his glorification of the pain. Yet there is something almost purifying in the process of pain and his journey into the extremes.

After the Antaractic run, he came home just in time for his daughter's 7th birthday. That night, he read Charlotte's Web to his children. After he put the children to bed. He had Thai takeout with his wife, where he proceeded to romance her. The next morning, careful not to wake his wife, he went out for a run.

I like the domesticity upon his return, and the greater significance behind this warm family reunion:

I realized that going close to the edge gives you a newfound apreciation of the familiar. Nothing gets taken for granted, and you see the world through fresh eyes. Running beyond the limits was my form of renewal.

Again, the word: "renewal." It keeps coming up when he is trying to make sense of his experience of running. It is almost spiritual ― Zen-like in his determination.

One of my yoga teacher once asked in class, "When does the yoga really start?"

"When you start to feel the strain, when your muscles start to burn, you are at the edge and you want to get out of the pose ― that is when yoga really begins.

"That's when your mind stops wandering and you are truly in the posture. That is when yoga really begins."

This is what keeps playing in my head as I was reading Ultramarathon Man. The book reminded me of this little lesson: true transformation is possible only when we are willing to push ourselves beyond the comfort zone, and in our return to meet the familiar with fresh eyes. Karnazes's story illustrates that any activity approached with full engagement and determination can be a spiritual undertaking.

People think I'm crazy to put myself through such torture, though I would argue otherwise. Somewhere along the line we seem to have confused comfort with happiness. I've now come to believe that quite the opposite is the case. Dostoyevsky had it right: "Suffering is the sole origin of consciousness." Never are my senses more engaged than when the pain sets in. This is magic in misery. Just ask any runner.

Perhaps Dean Karnazes's run is possible because he is running for something greater than himself. Perhaps he is running for his sister, Pary, who died in an automobile accident when she was 18. Perhaps he can run the extremes because he is always running with his very supportive family and friends. "Team Dean" is more than Dean Karnazes alone. When his sister died, the heart of the family broke. His running brought the family together. I believe that each time he runs, he carries within him all the hopes and wishes of those who love him.

Whatever the reason, reading Ultramarathon Man I find myself inspired by his message of heart and pain. I started looking at running shoes, and I wondered: if I could push myself to the edge, what will happen? Will I too, be transformed?

After reading Dean Karnazes's book, I feel like searching for these related titles:

This post was written while listening to Kaki King's Everybody Loves You.

I most likely would have skipped over this title if I'd come across it in the bookstore, but your review has made me curious. It sounds like it is a worthwhile read. I will be adding it to my wish list. Thank you for the great review!

Interesting ... there's a part of me that's very attracted to this sort of extreme endurance stuff, although I don't know that I'll push myself extraordinarily far -- I think certain personality types are drawn to it more than others -- but I do like endurance events for the way they make you focus on the present and the way they make you get to know yourself a bit better.

Literary Feline: Thanks. It's a fast read, and there are some moments when it's really touching too. Hope you will like it.

Dorothy: Dean Karnazes himself did wonder if his extreme running was a form of Obsessive-Compulsive Disorder. You're right - some personalities seem more drawn to these extremes. The more intense sort.

Still, there is a simplicity and focus in his running. From the comfort of my couch it's rather romantic. :)