BOOKS | Into the Wild 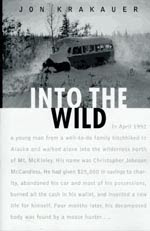 When I was reading Jon Krakauer's Into the Wild, it spurned some interesting comments from my colleagues. A few of my co-workers had read it. One of them was an outdoorsy type who had climbed Mt Kilmanjaro, and who had also read Into Thin Air, Krakauer's other more famous bestseller. He had to ask me why I was reading it -- because it's not the kind of book he associates with "a girl". That annoyed me a little. Excuse me while I go pick up something more gender-appropriate -- like Gossip Girl.

To idiotic remarks like these, I usually do a one-finger salute in my head.

But there is some gender-play going on in response to Into the Wild. I told some of the girls about Chris McCandless's dream of roughing it in the wild -- how he burned his cash, ditched his car, carried no phone, isolated himself in the Alaskan wilderness and lived off what he could forage or hunt -- and how he finally came to starvation and death.

Agnes's response was just to roll her eyes. With all the wisdom of someone who had to date men, she sighed, "Only a man would do something like that."

The girls laughed, because we get it. It sounds like such a stereotypical machoism that it's boring. We see how stunts like these are often a manifestation of egoism. It does what it wants to, without any regard for those left behind. Only a man would do something like that. No wonder we think women do not read this book.

But in spite of it all, I can see why Into the Wild became a bestseller. The story of Chris McCandless aka Alex Supertramp has this evergreen romantic wanderlust whiff to it. Part of the legend is that so little is really known about McCandless's motives. Everything is a re-construction from his journals, interviews with people who knew him. We guess at his motives, his feelings and his final days.

We loved this boy who went off into the wild and starved to death. We want to be able to do so ourselves, but without the suffering, without the death. Because he died, we get to mythologize him.

I admit while I was reading the story, it struck a chord in me: I recognize within myself the wanderlust, the restlessness, the feeling that things are meaningless unless you are willing to pit yourself against the odds. Krakauer summed up Chris McCandless more eloquently:

McCandless wasn't some feckless slacker, adrift and confused, racked by existential despair. To the contrary: His life hummed with meaning and purpose. But the meaning he wrested from existence lay beyond the comfortable path: McCandless distrusted the value of things that came easily. He demanded much of himself -- more, in the end, than he could deliver.

We're all trying to find some meaning in our lives. This book attempts to give some significance to McCandless's death, and his attempt to do what a lot of us only dreamed of doing. The restless romantic in me feels for Chris McCandless. I think he's a hero.

But I also find myself echoing the question by Chris's father -- who asked, how is it, "that a kid with so much compassion could cause his parents so much pain?"

Posted by darkorpheus on Monday, September 24, 2007

I should read this book; I think I'd have a complicated response too, and definitely part of it would be sympathy with the guy and a desire to go out and have adventures myself. I think I know a tiny bit of what he felt.

Oh, you should try. It's a good read -- and it's short. There is something very Everyman about Chris McCandless's restlessness. But then again, society teaches woman to stay home, to take care of the babies. Adventures are for the men.

well, charlotte built our bed, wants an electric guitar and plans to buy a boat one day. :D

Jean Pierre Okay, Charlotte is the PERFECT woman. Of course, she would be even more perfect if she reads comics and does hand-to-hand combat. :)

I read this myself, and remember coming away with some of those same feelings

(you can read my review as well as that of 10 other ladies, here, if you're interested)

Interesting that you had the experience of gender issues with the people you talked with about this book. I enjoyed the book and not once thought it was such a man thing to do. Maybe because I spent a childhood where vacation meant camping. I spent the book fretting over how woefully unprepared the guy was and how silly it is for someone to think that living off the land would be easy. We have these romantic notions about simpler times and hard work giving life meaning as Krakauer mentions. But in reality there is nothing romantic about it and if you don't know what you are doing you wind up in trouble or dead. Even people who know what they are doing sometimes end up hurt, lost or dead.

The book is very compelling and I remember zipping right through it. Krakauer is a very good writer.

Mo Hi. Thanks for dropping by. I read the comments on Bookcrossing on Into the Wild -- the book garnered some interesting response. It's a book that a reader respond to -- even if that means they think Chris McCandless is an idiot -- or a hero.

Stefanie Gender politics is rampant around my workplace, so maybe that's how it came up.

It never occurred to me either that Into the Wild was a "Man's Book" until Outdoorsy Guy made that remark.

As much as I thought Chris McCandless was foolhardy -- and ill-prepared -- his idealism, that obsession with Tolstoy -- I can identify with him. I find it so hard to just dismiss the poor guy.

I'm so going to read Into Thin Air

Interesting. I thought you were talking about Into Thin Air when I saw the title. So I was confused for a few moments! :)

"Adventures are for the men."

Hmm...I've wrestled with this issue all my life because I've grown up being very inept in sports. I felt so slighted when kids in PE made fun of this imbecility. Even to this day I still don't know how to shoot hoops or to score a touch-down. It's not my cup of tea. LOL

I do hike a lot and swim 4 days a week. :) I travel, on my own, overland throughout Indochina. I consider that an adventure.

Matt The world has all these odd expectations of gender roles. Men are expected to do well in contact sports, while stuff like yoga and reading are for girls. I'm not impressed by these ideas.

The world also has stereotypes of introverts & extroverts. I used to camp and hike, was on the school swim team, run 8 kilometres for the fun of it -- but people don't believe I do all those things because I am also the Vice President of our Chess Club.

Now everyone knows I do yoga -- but when I mention I tried wakeboarding, people look at me weird. I read a lot, so I can't possibly wakeboard. Duh.

Oh yeah, you are definitely an adventurer. :)

Hmmm...I've read other reviews of this book and been led to think "why would I waste my time reading about such an idiot?" You've left me rethinking it though...thanks for the wonderfully insightful review.

I had these stereotypical wonder that you were going to read the Cha series. Only boys read those! See how ingrained we are in these gender stereotypes.

I try very hard to break away from these stereotypes that have fettered how life is being shaped.

When I joined the very first book club, all my friends laughed and joked about this is what housewives do! And indeed I showed up at the meeting among young married women and middle aged housewives.

But I think life is about striking the balance out of what I think is best for me. I certainly like to defy gravity! :)

Debi You're not the first person to think Chris McCandless was a idiot. There's definitely something reckless in what he did -- but it's also bold and a little romantic. I hope you will enjoy Into the Wild. It's a well-written book.

Matt I often thought Louis Cha was a little melodramatic in his fictional relationships. And there's always a male protagonist that all these beautiful, intelligent women just can't help but fall for. So, didn't think Cha was just for boys. :)