BOOKS | The Narrative of Return in The Stone Gods 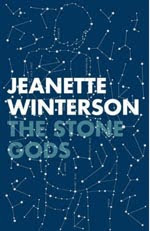 I need to post the disclaimer that as I was reading a uncorrected proof copy of Jeanette Winterson's The Stone Gods, some of the quoted texts may not be as they appear in the final published version. (Do you think they will sue me if I quote from the proofcopy anyway?)

I have enjoyed The Stone Gods. It does get a little polemic at times, as the environment and how we're misusing the planet is one of the themes of the novel. But to read Winterson, one has to accept that she writes most eloquently when she has a cause to fight for.

Structurally, The Stone Gods shares similarities with previous Winterson novels like Lighthousekeeping, Sexing the Cherry and The Powerbook. The elements are familiar: cyclical history, multiple first-person narratives, many smaller sub-narratives/stories embedded into the novel - all illuminating in one way or another the grand theme/s.

The book opens in a dystopian near future of genetic enhancement. Billie Crusoe, the protagonist, is exiled to a nearby planet, the Blue Planet, which the authorities hope they could colonise as the home planet is dying. There is a love story between Spike and Billie. They land on the Blue Planet, which they have also unintentionally set to trigger an Ice Age, because we are humans and we destroy all that we touch. So from here, history is rebooted. One day, millions of year later, on the Blue Planet, another Billie and another Spike evolved.

Am I making sense here?

Let's just say Winterson is not an expert at science fiction. But here she uses the idea of reliving time, reliving history to explore how we humans continue to make the same mistakes in different permutations, even as we struggle towards a return.

When I look back at my own life - and in circumstances like these, who can blame me? - what is that I recognize?

Not the stories with a beginning, a middle and an end, but the stories that began again, the ones that twisted away, like a bend in the road.

The open-opened stories are what she is interested in. Not the clean, nicely tied up stories where "They Lived Happily Ever After" - because, "True stories are the ones that lie open at the border, allowing a crossing, a further frontier." True stories venture into the unknown, where adventure lies. Yet as our protagonists undergo their trials and tribulations - like Robinson Crusoe, like Ulysses - adventurers both, at the end, they are reminded of their need to return, because the other side of venture is Return. It is the condition of humanity, the need to explore, to venture off the path, and then to return - because we suffer from that condition of the heart: Loneliness.

Loneliness is about finding a landing-place, or not, and knowing that, whatever you do, you can go back there. The opposite of loneliness isn't company, it's return. A place to return.

It's a familiar theme in her stories. It sometimes feels like she is essentially telling us the same story over and over again, in different permutations each time. And yet like the re-telling of myths and legends, I never get tired of reading her.

PS: If you're looking for a copy in the stores, the UK Hamish Hamilton edition of The Stone Gods should be available by late September 2007. I have no information on the US publication date though.

Posted by darkorpheus on Sunday, September 02, 2007

It really is about time I read Jeanette Winterson. I love the passages you shares, especially the one about loneliness.

I read a proof copy too and enjoyed it very much - thought it was (at least in places) her lightest and most fun book since Sexing the Cherry (which is my personal favourite).

I'm interested in what you say about Billie and Spike re-evolving on the Blue Planet. Was this your take on Parts 3 and 4 of the book (Post-3 War and Wreck City)? I had interpreted those as 'interim' sections between our time and the future world in Part 1 (Planet Blue). But I could so easily be wrong...

Nymeth Oh yes, please do. Winterson is one of my favourite authors - so, of course I'm bias! - I really recommend that you try one of her books. You might like to start with "Oranges are the Not Only Fruit" - so far, it's one that people usually recommend as a start - and one of the less disputed titles. Some of her books are either hit-or-miss - you have people hating or loving the same titles.

I love that loneliness quote too.

John Hi, thanks for dropping by.

I had that idea from Handsome's story about the Boy who kept reliving his life. So I read it as time progressed - but it's a cyclical progression.