R.I.P. II | Hellboy: The Troll Witch and Others 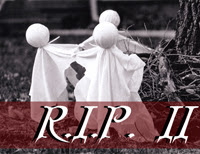 Reading for The R.I.P. II Challenge: 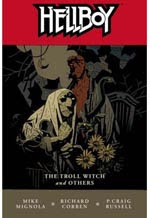 Last we saw of Hellboy, he had resigned from the Bureau for Paranormal Research and Defense (BPRD) and was on a walk-about, trying to find out more about his destiny and the enigma behind his Right Hand of Doom.

Hellboy: The Troll Witch and Others does not pick up the trail of our demonic crusader. Rather, it is an anthology of stand-alone Hellboy stories from the days when he was still with the BPRD. Some fans may be disappointed, as some of the stories have been collected in other Darkhorse anthologies. But there are a few original tales, and once again Mike Mignola retells folklores of monsters and demons, using his badass red demon prince from hell as the hero.

Mike Mignola had also roped in P. Craig Russell and Richard Corben for two stories in this collection, and their renderings of Hellboy are superb. I love Mignola's stark artwork -- but sometimes it can be refreshing to see one of my favourite comic protagonist through another artist's interpretation. Corben's Hellboy was drawn with smooth, elegant lines. It felt natural, a big red demonic hero in an African tale.

Makoma is an archetypal hero's journey set in old Africa. In 1993, Hellboy came face to face with an African mummy found in a lost city. The mummy called out to Hellboy, told him a story, perhaps of a past life when the land was young and Africa knew him then. They called him by another name which he gave himself: Makoma, which means "He Who Is Without Fear". He was cast into a deep pool of black water when he was still a child. The pool was full of crocodiles, but he emerged from it fully grown -- and holding in his hand an iron hammer. Makoma has come to deliver the world of evil powers.

So Makoma, in the form of Hellboy travelled. He vanished many creatures, and carried the vanished creatures with him in a bag -- given to him by an old woman. The vanished beasts within the bag became his friends, and they helped him along the way. His friends praised him constantly: "MAKOMA IS GREAT!" To these cries, Makoma just shouts, "Quiet!" It was funny, in a pure Hellboy way.

Finally Makoma comes to the end of the world. His friends trapped within his bag have offered up their flesh as feast for Makoma, before his final battle. Makoma weeps when he realises what had happened. And he battles the Dragon, the ruin of all things that live, land, sea, and all flesh. They battled for a long time, until their strength finally fails them; they fell together. Makoma has delivered the world from evil power, as he had promised. 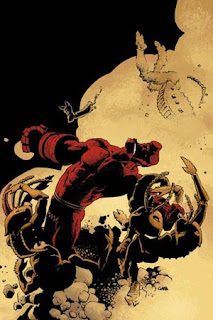 Hellboy is what happens when folklore, good story-telling and great art come together. I love Hellboy. Always will.

Posted by darkorpheus on Friday, September 14, 2007

i read the first hellboy trade and, although i enjoyed it, i haven't really rushed to get the next one.

but from what i've heard jeff and carl say, and from your review now, it looks like the series gets a lot better as it goes on...!

Oh yeah. It gets better, and there is a very genuine sense of humanity and heroism in Hellboy that's just cool. Hellboy is one of the most grounded character around, especially when you consider how he's a demon prince from hell and all that. :)

I saw a bit of the film the other day but wasn't too taken with it. The comics are usually better though so I will see if my husband has any hidden away I can have a read of.

If you're unfamiliar with Hellboy then the film isn't a very good place to start, ie. certain changes in plot, mood and characters meant that, whilst it may not be wholly terrible, i would be surprised if many Hellboy aficionados were not slightly disappointed by it. That aside you would probably do best to read either the collected edition of 'Wake The Devil' - one of the longer story-arcs in the series that is probably Hellboy at it's purest and best - or one of the collections of shorter stories such as 'The Right Hand Of Doom' or 'The Chained Coffin', it's all good however if you're looking for intelligent and human story-telling and at times truly sublime artwork.