What I'm Watching for the Beijing Olympics

It's annoying but I've been unable to catch the Beijing Olympics as much as I would like to. We don't have the sports channel on cable, and since I don't normally watch TV, it really seem like an unnecessary expense.

I've always preferred watching the water sports, especially swimming and diving. Even sychronized swimming has a certain allure. Something about the combination of grace, strength and speed in water - it fascinates me. (But knowing me, it could also be all that sculpted bodies in wet swimsuits. The broadness of the shoulders, the tight waist and powerful thighs - so pleasing to the eyes. But I digress.) 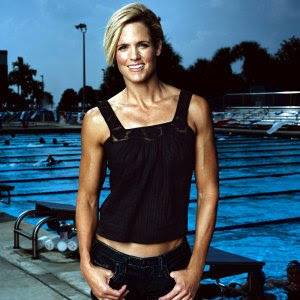 A while back, I read about how Dara Torres qualified for the Olympics at the age of 41 - beating her own 2000 Olympics record for the 50m freestyle. With 9 Olympic medals behind her, she has nothing to prove - except that she can still go further. The sheer determination and focus of this woman is awe-inspiring. I knew I had to watch her for the Beijing Olympics.

Well, her and Michael Phelps. :) (I think Phelps is going to win more gold before the Olympics is over)

Congratulations to Dara Torres and her team-mates for winning the silver medal for the Women's 4 x 100m Freestyle Relay [NY Times]. This silver makes it Torres's 10th Olympic medals.

And good luck to you, Dara, for the 50m Freestyle. I'm rooting for you. I also want to have a body like yours when I'm 40.

Dara Torres, by the way, is not the oldest woman competing in the 2008 Beijing Olympics. French cyclist, Jeannie Longo, is 49.

Anyone else feel like they should be exercising right now?

Dara Torres is frickin' AWESOME! Such an inspiration to us 40-somethings!

Dara is an inspiration! I want her body! If only I wouldn't have to work so hard to get it!

Yogamum - She's a mom, she battled bulimia, and she's still in the Olympics. Yes, AWESOME is right. She's an inspiration not just for 40-something. For women of every age!

Stefanie - I would recommend yoga. And it'll be fun along the way. ;p

Carl - We can all start now. I know I need to work on those abs.

But I would skip the gym and work on something that is actually fun (yoga for me, of course) - like maybe jogging with your dog, rollerblading etc. To have a killer body is great, but I don't see why it shouldn't be fun too.