BOOKS | What's Bred In The Bones 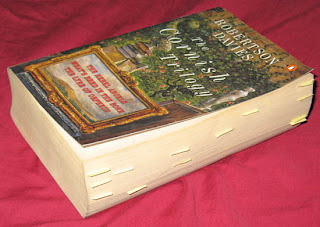 Thank god I decided to read Robertson Davies on the plane. Flight delay and the long haul allowed me to finish What's Bred In the Bone - the second book in The Cornish Trilogy. It's a different tone from The Rebel Angels - more of a bildungsroman, more sober, less jokes about shit and farts.

In The Rebel Angels, part of the plot has great art collector Francis Cornish dying, and among his collection was a recent acquisition of a Rabelais manuscript that the academics are fighting for. For What's Bred In the Bone, Davies turns his eye on Francis Cornish, the forces at work (some even supernatural) that shaped his destiny as grand patron of art. And in between, Davies explores the power of the Arts that shapes a man's character and direction in life.

Francis Cornish's quest for art is his Grail Quest. The poetry of Robert Browning comes up occasionally, with Browning's assertion that art has the power to bring out the truth. For Davies, art provide a meaning to our lives that we cannot erase. When Cornish is under the apprenticeship of the Master, Tancred Saraceni, he learns to touch up old paintings to make them look more valuable - and the paintings are later sold to the Nazis who are swapping Italian masterpieces in exchange for German ones. Saraceni uses this to explain:

Why do rich Americans pay monstrous prices for paintings by Old Masters which they may, or may not, understand and love, if it is not to import into their country the certainty I am talking about? Their public life is a circus, but in the National Gallery at Washinton something of God, and something of the comfort of God's splendour, may be entombed. It is a great cathedral, that gallery. And these Nazis are ready to swap splendid Italian masters for acres of German pictures, because they want to make manifest on the walls of their Fϋhrermuseum the past of their race, and so give substance to the present of their race, and provide some assurance of the future of their race.

Art is meaning, as myth provide us a key to understanding. Saraceni reminds Cornish to keep reading Vasari's Lives of Painters for inspiration in his own life-quest. In the lives of the artists we find bohemians who followed their own ways and are great because of it. At the end, Saraceni challenges Cornish to paint something with the technique and the spirit of the Old Masters. It has to be big, not just in scale but big in concept, and it has to be Cornish painting as himself, as thought he lived in the 15th or 16th century.

I have heard Davies is good, but can't decide whether to try him or not.

I know what you mean. It took me a long time before I decided to pick him up. Davies takes patience - and maybe a lot of free time. But I think he's worth it.

I'm currently reading The Cunning Man AND The Deptford Trilogy, and find it amazing that the man is not as well known as authors like John Irving or Richard Russo (he's a MUCH better writer!)

You must read 'The Lyre of Orpheus', in which Simon Darcourt finally finds Cornish's masterpiece while helping to put on an opera.
Incidentally, if you like Herodotus, try 'Anabasis' by Xenophon. There's also a really good modern history of the Persians and Greeks called 'Persian Fire' (I forget who it's by).

Bryan Oh, I have read The Lyre of Orpheus. It was fun, but I think I still prefer The Rebel Angels out of the entire Cornish Trilogy. It's definitely the funniest and the most opiniated book in the trilogy.