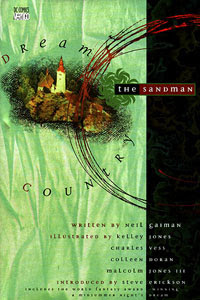 Once Upon A Time Challenge 2007

Dream Country collects a few Sandman stories, the cream among them is the World Fantasy Award winner: A Midsummer Night's Dream. It won, and it riled a lot of people who declared never again shall the award be given to a *comic book*. Oh well. For some of us, Adam and Eve rode the dinosaurs to church.

(Okay, okay. Unfair. Overly-critical. Self-righteous. Below the belt. Totally irrelevant to the intended subject of this post.)

I decided to read Sandman: Dream Country specifically for the Midsummer Night's Dream short story. I thought it will make a good idea to kick off the Once Upon A Time Challenge with an interpretation of Midsummer Night's Dream, and end with the Shakespeare original ― like a pair of bookends. I believe The Sandman was the most successful graphic novel series to date to bring the medium into mainstream awareness and literary esteem. It might be contradictory to call something both "mainstream" and "literary" ― yet this is precisely what Gaiman has achieved: bringing comic art and literature together. What The Sandman series represent, is a lifetime of reading filtered through Gaiman's imagination. And Gaiman's A Midsummer Night's Dream is a tribute to the Bard, and perhaps a tribute to the Dream King himself. Afterall, who can truly separate the dreamer from the dream?

It is Midsummer's Eve, the year 1593. It is the time of the playwright, William Shakespeare, who made a bargain with a figure out of myths and stories: in return for his inspirations, for words that will echo through time after him, Shakespeare promised to write two plays for his mythical patron, Morpheus ― King of Dreams. The first of these is "A Midsummer Night's Dream", to be performed on Midsummer's Eve on Wendel's Mound, which was a performance space before the humans came to the island.

Morpheus asked for a play to be written and performed by Shakespeare's troupe. Unknown to the human actors of Shakepeare's company, the play will performed for Auberon of Dom-Daniel and his queen, Lady Titania, and the Faerie folks. The world has changed, and the Faerie folks determined it will be their last sojourn to this earth; Auberon tells Morpheus:

AUBERON: Things have changes, and will change more; and Gaia no longer welcomes us as once she did.

And so the faerie folks are passing. Though one wonders what they will bring with them in their passing? Yet Morpheus will have his say in some things. And he will achieve them through the power of words and creation:

MORPHEUS: You have asked me why I asked you back to this plane, to see this entertainment.

I ... During your stay on this Earth the faerie have afforded me much diversion and entertainment.

Now you have left, for your own haunts. And I would repay you all for this amusement. And more:

They shall not forget you. That was important to me: that King Auberon and Queen Titania will be remembered by mortals, until this age is gone.

AUBERON: We thank you, shaper. But this diversion, although pleasant, is not true.

MORPHEUS: Oh, but it IS true.

Things need not have happened to be true. Tales and dreams are the shadow-truths that will endure when mere facts are dust and ashes, and forgot.

Morpheus is one of The Endless, each of them serving to represent an aspect of existence. Morpheus's domain is Dream, and with it the creative unconsciousness where all inspiration springs. Yet all things cast a shadow. Dream, by its existence serves to define its opposite ― perhaps Reality. Perhaps Truth. Recall that Midsummer Night's Dream runs on the deceiving qualities of magic, of falling in love with an Ass-head because we could not see what is in front of us. The play is played out, with the real Puck coming onstage to play himself, and drama ensures both onstage and offstage. Players and play, on Midsummer Night's Eve, the lines between the two are blurred, and so as the Puck closes the play with his speech, which could have come from the real Puck, Shakespeare, or even Neil Gaiman himself:

If we shadows have offended,
Think but this, and all is mended,
That you have but slumber'd here
While these visions did appear.
And this weak and idle theme,
No more yielding but a dream,
Gentles, do not reprehend:
if you pardon, we will mend:
And, as I am an honest Puck,
If we have unearned luck
Now to 'scape the serpent's tongue,
We will make amends ere long;
Else the Puck a liar call;
So, good night unto you all.
Give me your hands, if we be friends,
And Robin shall restore amends.

All is play, and in the spirit of play is this story written. But Gaiman's or Shakespeare's? No matter what, Gaiman and his team did put up quite a good show. Let's just end this post with these thoughts:

Perhaps the passing of the faerie folks is the reminder that once we believed in something beyond our physical senses. The world changed, we changed it. Perhaps we can remake it better.

Love Sandman, and in particular this story. Great idea for bookending the challenge with this interpretation of a Midsummer Night's Dream and the original play. Nice! I'm only sorry I didn't think of something that clever.

The Puck speech comes straight out of Shakespeare, it is the conclusion of the play. I've been wanting to read Sandman and now you are making me really want to read it!

Carl: I was also thinking of watching the film adaptation of it- unfortunately the only version I can get my hands on easily is the one with Calista Flockhart. Hmm.

Stefanie: Realise I wrote myself into a tangle. In Gaiman's version, Morpheus gave the inspiration to Shakespeare for the play - hence all that is written by Shakespeare, comes from Morpheus.

And in the Gaiman story, the faerie Puck takes the mask and comes on stage, playing a parody of himself - he speaks the lines from Shakespeare original, but it becomes a sort of "theatrical apology" for faerie Puck playing stage-Puck, and Gaiman for playing Shakespeare - which I find kind of cool.

Ah, I get it. Sounds very cool and makes me want to read Sandman even more.

I love Sandman and can't decide who I want to run away with more - Neil Gaiman or Morpheus. (Reality does not enter into my fantasies in the least, as you can tell : ))

The Flockhart version is the one that I haven't seen yet. Need to watch it this year. I also have a video copy of the 1968 Royal Shakespeare Company performing it. It is hilarious. It has a great cast: Ian Holm, Diana Rigg, Judi Dench, Helen Mirren...they are all so young and it is a really fun version.

That "things need not have happened to be true" quote is probably my favourite Sandman quote, and that's saying a lot.

i think that one qoute in the kindly ones is pretty awesome'we do what we because of who we are and we are who we are becuase of what we do' or something like that.im only slightly addicted to the Sandman comics.