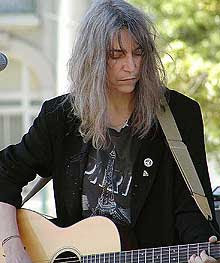 If it was possible, every day should be Patti Smith Day — but it's not, although occasionally we do have a new album by her.

Twelve — her new album — was released recently. It's not based on original materials unfortunately. Rather, it's a collection of 12 covers Smith did on the songs of various artists. Still, it's her delivery of the songs that matters, and fans of Patti Smith will want this. I can never get tird of hearing her deep, raspy voice drawing out the lyrics.

Pitchfork: And then you can re-read, too. Do you still love Rimbaud as much as you used to?

Patti Smith: Are you kidding? I still read Pinocchio. I read Pinocchio, or Uncle Wiggly, or Lewis Carroll. I re-read Herman Hesse. I love my books. I re-read books the way I play albums over and over. I've listened to the same Maria Callas record a thousand times, just like Blonde on Blonde. I'm always moved by people's work, and it's part of the beautiful things in life, you know? Looking at the work, and seeing inside the mind of other people. Then, you know, contributing your own thing.

I still listen to Horses over and over. It never ceases to move me. The quote above is a reminder from Smith that it's okay, even at 60, to go back to the things that inspire you — even if it's a children's book like Pinocchio, or Lewis Carroll, or even "retro" music that was hip 20 years ago, but which the twenty-something friends of yours don't even recognise. Look at the works that other minds and hearts have created. Allow them to engage you, and then bring something of yourself into the experience. That, is Art.

What I like most from this interview is how at 60, Patti Smith is still going at life with the uncompromising spirit of a bohemian artist. In her heydays, she was the Prophetess of Punk Rock. At 60, she's still the iconic Patti Smith.

Patti Smith: When I was in my twenties, I had huge amounts of energy. In fact, I had too much energy sometimes, and a lot of times I needed to focus, because my mind was all over the place. Art was a good way to focus that energy. Rock n roll was a great energy, a great way to focus my energy on all the things I had to say, whether they were poetry or political ideas or just-get-it-all-out energy. I just turned 60, and I still feel connected to a certain amount of rage, or excitement, or a sense of fun. I was just downstairs, and my son [Jackson, 24] was playing on guitar. He was playing "Jump" by Van Halen, and we were just dancing around. So in certain ways, I don't feel any different at all.

You are only as old as you allow yourself to be. Engage yourself in the things that invigorate you, be it art, music or sports of any kind.

She does have a great voice. I'm going to have to see if this is on Rhapsody so I can check it out.