Eileen Chang and How Little We Truly Know 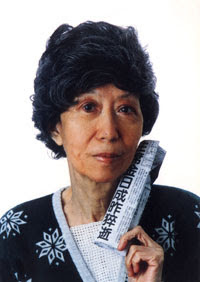 A while back, I was asking a friend about Eileen Chang, and my friend told me this story: It seems Eileen Chang was something of an eccentric and a recluse. She basically did a "Harper Lee" and took great pains to avoid the public eye. But one fine day, Chang decided to make a statement that "She ain't dead" (and perhaps to make a sardonic point about outliving Kim Il-sung).

So she took a picture holding a Chinese language newspaper with the headline: "Chairman Kim Il-sung passed away suddenly yesterday" - for the purpose of dating it. (Kim Il-sung died on July 8, 1994.)

One wonders at this woman's sense of humour. Actually, it makes me want to read her books.

Since NYRB published her English translation of Love In A Fallen City, Eileen Chang seems to be gaining a slow recognition among the English-reading community. As Focus Features releases Ang Lee's (director of Brokeback Mountain) film adaptation of Eileen Chang's Lust, Caution (Chinese Title: 色 戒), I suspect more people will be wondering who is this "unknown" Chinese author. Perhaps more people will actually read Eileen Chang. One can only hope.

From MonkeyPeaches.com, the film synopsis goes:

Based on the Eileen Chang's same title short story, which was inspired by a true event, the story of Lust, Caution is set in the Japanese occupied Shanghai in the early 1940s. It tells a young woman Wang Jiazhi is assigned to approach Mr. Yee, a high-ranking official worked for the puppet government, and tricks him to an assassination trap. Then she realizes their relationship has dangerously grown out of control. The cast includes newcomer Tang Wei as Wang Jiazhi, Leung Chiu-Wai as Mr. Yee, Wang Lee-Hom as Kuang Yu-Min, Wang's comrade and lover, and Joan Chen as Mrs. Yee.

Randomhouse will be releasing the film tie-in for Lust, Caution. Do check it out if you think you're interested.

Of course, this isn't the first time a Eileen Chang story has been adapted for the screen. Stanley Kwan directed a beautiful version of Red Rose, White Rose: where Winston Chao is caught between two women: Joan Chen (Red Rose), who represents forbidden desire, and Veronica Yip (White Rose), his wife - who is supposed to represent virtue. Earlier adaptation also includes Hong Kong director Ann Hui's Love In a Fallen City (which stars Chow Yun Fatt), and Taiwanese director Hou Hsiao-hsien's Shanghai Flowers (which has Tony Leung Chiu Wai and Carina Lau, both of whom you might have seen in 2046).

I guess my point is: Ang Lee's Hollywood glitter from Brokeback Mountain may rub off on Eileen Chang's stories and earn her new readership. But she has always been known to the Chinese through her writings and the film adaptations. Then again, I realise there are also a good number of ethnic Chinese who have no inkling of Chang either. They have lost touch with their literary heritage, and they may be more familiar with Jane Austen and Fyodor Dostoevsky than any Chinese authors dead or alive - and it depresses me.

And then it makes me desperate to want to travel more, to read more, to know more about the rest of the world.

Well the thing is an author is not considered to be properly rated and distinguished until she has been feted in the USA/UK. (On the other hand I do think that when the American coverage mentions the "unknown" thing they're speaking to an Western audience -- the NYRB article I read did not obscure the fact that she was read in China.)

But it reminds me of a stupid article I read about a year back on Yasunari Kawabata that started out by bemoaning the fact that Japan lit. had no Hemingway. (Wtf!?!)

Err, what I meant to write in hyphens was that were saying that in a Western "context" not audience. Phooey.

But ah, the editors at NYRB are obviously a more discerning and well-informed group than a lot of other publishers. That's why they chose to translate Eileen Chang before Randomhouse.

It also reminds me of an interview I watched once of a famous Bollywood actress. The interviewer asked if she was going to Hollywood next, to advance her career.

She replied flatly: She does not see the need to go there; the world doesn't revolve around Hollywood.

Just a supplement to the Kawabata/Japanese Lit bit: A friend of mine who studied Japanese once commented that the reason Hemingway is more widely read in Japan(translated in Japanese of course) than say, Faulkner or Fitzgerald, is that his terse prose actually translates better into an ideogrammatic language like Japanese.

It makes me wonder how even though I try to read more Italian/ Spanish/ French/ German/ Russian lit - how I'm just brushing the tip of the iceberg - because there are so many more important and significant writers who are unavailable to me because they have not been translated into English.

Hey, this article has some relevance to what this post was about: The Unseen literary world

just wanted to leave u this link to the eastsouthwestnorth blog. blogger is a roland soong, whose dad was a professor who kept a close correspondence with eileen chang. he translates some of those letters and has stories to tell about her. apparently the late prof soong helped work on lust, caution.

he has quite a number of entries on her, if you search his blog...

Imani: Thanks - you're right, especially this bit in the article: "I was struck anew by how towering figures in world literature can fall beneath the radar in the west, or slip from memory. It may be worse for those not writing in English". Exactly how I feel about the state of world literature right now.

precious: Hi hi, got it. Thanks. Actually, I think I came across this link - the joy of google. To be honest, not the biggest fan of Ang Lee. He's good for Sense and Sensibility, but I never forgave him for Crouching Tiger, Hidden Dragon - in spite of Tony, I think Lust, Caution will disappoint.