I watched first watched Elizabeth during the final year of university. I watched with with some of my classmates, and we all came out of the cinema in awe of the film ― and of Cate Blanchett. It is proof of Cate Blanchett's talent as an actress that while Elizabeth was the role that made her, it will not be the role that defines her. With each new role, she seems to just slip into the skin of the character and make it hers. Perhaps this is why she was so suited for to play Elizabeth I. The film afterall, is about the struggles of a young woman coming into her own identity, her own power ― even if that means forsaking marriage and remaking herself in the image of a Virgin Queen.

There are also many other memorable performance in Elizabeth. Among them, an alluring Fanny Ardant, who played Mary of Guise, and Geoffrey Rush, who played spymaster Walsingham with a prowling stillness.

In The Golden Age, Cate Blanchett and Geoffrey Rush reprise their former roles, with Clive Owen as Walter Raleigh. The plot seems centered around Elizabeth's growing but forbidden affections for Sir Walter Raleigh, against the larger political backdrop of the threat of the Spanish Armanda.

[Movie Still #1] The red in her dress, her fan and her hair. It brings out the intelligence and the green of her eyes. The finger to her lips. Inscrutable. 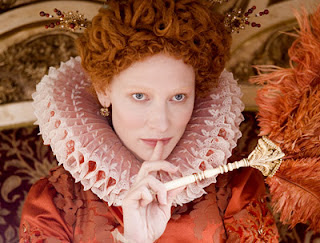 [Movie Still #2] The splash of purple against the map. She is a queen, and she walks across the world, yet she also seems somewhat diminished by the world that is larger than her. A splendid image. 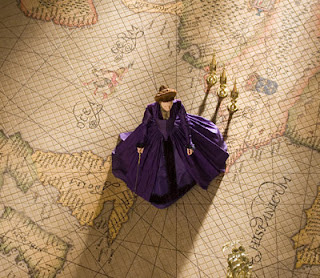 [Movie Still #3] My favourite still is this one with Cate Blanchett in armour, mounted. It is the sheen of the armour against the reddish hair, and Cate Blanchett's pale face and intense eyes; The stark beauty of the image. It is the picture of a queen who fights for governance of her heart as well as her country. 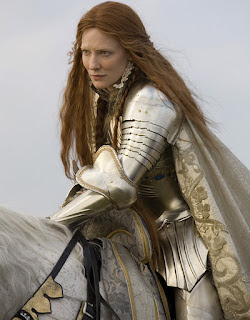 I've just watched the trailer for the sequel to Elizabeth, The Golden Age. They obviously have spared no expenses on the lavish sets and costumes.

i like period piece movies.. costumes are always fantastic!
Real or fiction they are a nice departure of the norm.

Being a lover of period piece films, I am embarrassed to admit that I have yet to see this. I will sometime, honestly. Hopefully before the sequel comes out! ;)

Great post. I love that film, and Cate Blanchett is amazing.

Hmmmm. I hope the pomp does not overshadow the acting that made the first Elizabeth movie a formidable one. I don't think that Owen and Blanchett can be overwhelmed by elaborate trappings but I don't want them to be the only stand out things in the movie. :p

I'm not sure about those ships-on-the-sea scenes. The SFX looked dismal.

Wow, I can't wait to see this movie.

deslily - Then Elizabeth is a film to enjoy. The costumes and set are just feast for the eyes.

carl - You must remedy this oversight now! Quick, schedule a quiet weekend. Rent the DVD and watch it with your family. And after that, maybe you can watch Fellowship of the Rings for Cate Blanchett with the elvish ears.

LK - I love it too. I quote from Elizabeth to often for any sane person.

imani - It's hard to imagine anything overwhelming Blanchett's screen charisma. Not sure about the naval thing though - since they are leading up to the Spanish Armada, I suppose there will be some screen time at sea. Great naval battle scenes perhaps, with Owen at the helm. At least it's not Russell Crowe on the ship.

bybee - Neither can I. But latest news The Golden Age will only be showing January 2008 here. When will it reach Korean shores?

I haven't seen Elizabeth, although I'm a great fan of Cate Blanchett based on other films I've seen her in. Clearly, I'll have to put Elizabeth and the sequel on my must-watch list!

Kate - Well, I'm optimistic but not 100% sure about The Golden Age, but Elizabeth is one of my all time favourite.

It also has Vincent Cassel playing a French bad-boy - as though he can be anything else? :)

I can't wait to see this film! I loved the first one with the yummy Joseph Fiennes playing alongside the beautiful Cate Blanchett. The costumes look amazing and I love the image of her walking over the map wearing very regal purple.

you are right - this film is visually so beautiful, isn't it! and cate blanchett's variety within the role is so good. the fact that she can handle that look in the armour as well as be in a dress.

i'm still mystified as to why she didn't win the oscar - i know one shouldn't be, its not as if the oscars are truly definitive or anything. but still, it must be one of the best performances by a female lead ever...

I loved the first movie (I even own it)--I had no idea they were making another. I like Cate Blanchett a lot, too. At the moment I have out the Elizabeth I movie with Helen Mirren. I have a bit of an Elizabeth I fixation.