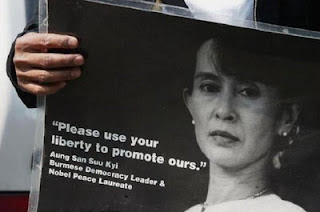 19th June 2007 marks the 62th birthday of Burmese pro-democracy leader, Aung San Suu Kyi. According to The Independent, she would have spent 4,253 days in detention.

One of the books I'm reading right now is Freedom from Fear, a collection of Aung San Suu Kyi's (also known as The Lady) writings, as well as interviews, letters and speeches related to The Lady. I've wanted to read this for a long time, along with the biography of Mahatma Gandhi. For me, Aung San Suu Kyi possesses the rare qualities of selfless courage and grace under duress. Through her actions, Aung San Suu Kyi embodies the spirit of karma yoga as taught in the Bhagavad Gita.

The book has an introduction by her husband, Michael Aris, who died in 1999 [Read the BBC obituary]. The introduction tells of how The Lady returned to Burma to care for her ailing mother, and how circumstances led her to join the political struggle for Burma's liberty. Her party, the National League for Democracy, won the elections by a landslide 80 percent, but the ruling regime would not relinquish power, and they placed her under house-arrest.

It is hard to read the introduction when one is aware of the circumstances behind the couple's separation. Since Aung San Suu Kyi's house arrest in 1989, Mr Aris had only seen his wife on five brief occasions before his death.

The Lady insists on a non-violent struggle for democracy. I am skeptical of whether it is truly possible to stay non-violent when power lies in the hands of those who would abuse it. I used to believe in capital punishment and strong, punitive measures against lawbreakers ― an advocate of the "An eye for an eye" system of justice. But over the years my beliefs have altered somewhat. I no longer believe that the death sentence or longer prison terms can prevent crime or protect us from the evils of the world. Somewhere along the way, I begin to see the unfolding of karma and I begin to believe that violence cannot be the solution to tyranny and aggression ― but how does one fight unfairness and tyranny then, if not by force? One cannot always just turn the other cheek. I look at The Lady and I wonder at the kind of strength needed to endure what she did and not break, and not give in to violence.

On 25th May, 2007, the Myanmar's military government Friday extended the house arrest of Aung San Suu Kyi by another year. [Read the CNN report here] They hope to silence The Lady's voice by keeping her under house arrest, by keeping her away from those who would hear her message. I say we must not forget her, the Lady Aung San Suu Kyi. So I read her book, her message to the rest of the world who are more free than she:

PS: In a related note, Andrew Buncombe asks a series of questions on the fate of Aung San Suu Kyi and freedom in Burma for The Independent.

Once again, I'm exposed to information that has somehow slipped by me. I can see why Aung San Suu Kyi has captured your imagination, both your post and the CNN report are informative, a tale of courage and of oppression. Very few people have had the courage and stamina required to pursue non-violent means for justice; however, Ghandi and Martin Luther King's persistence were perhaps the only way to institute the changes they sought. Hopefully, Aung San Suu Kyi's struggle will eventually produce changes, but by keeping her silent the Burmese government can certainly delay these changes indefinitely.

Hi Jenclair, thanks. i think it's just that Aung San Suu Kyi has been under house arrest for too long. It's not longer a BIG issue for the news media. That's what's so scary - that when we forget about her, the tyrants win.

Both Perfect Hostage (Wintle) and Freedom from Fear (Suu Kyi) make excellent starting points for anyone wishing for an understanding of Aung San Suu Kyi and modern Burma. Letters From Burma, twelve compositions by Suu Kyi written between '95 and '96 for a Japanese newspaper, was my first burma-related book. Aung San Suu Kyi is an astounding writer. I want to thank you for writing about Suu Kyi - there is not nearly enough attention paid to her in the press these days. Her freedom will come - with political liberalization - one day soon. Changes tend to come fast and unexpectedly. I only hope that China, who hold the key to such change in Burma, will change tack soon. Anyway, I won't ramble. with metta... Matt

Hi Matt, thanks for dropping by. And thank you for recommending the books. I first came to be interested in Aung San Suu Kyi and her struggles when I was reading up on Buddhism. Around 2 years ago I chanced upon Emma Larkin's Secret Histories - and it made me what to read more.

I have Letters from Burma right now. I will probably read it after I'm done with Freedom from Fear.

And you are right, not enough people are writing about Aung San Suu Kyi. Instead, the media dedicate a lot more coverage on topics like Paris Hilton going to jail.