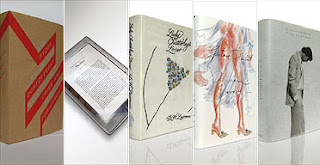 Recently in our local newspaper, the Books Journalist finally ran a story on the Penguin Designer Classics. In commemoration of their 60th anniversary, Penguin Classics invited 5 designers to give some of their literary works a cover make-over.

But what annoys me is that the local Books Journalist chose to zero in on the price angle of the Designer Classics. She even quoted the auction price on eBay for some of the Designer Classics, as well as mention how customers are entitled to 20% discount because of our Christmas sale right now. It is as though the most important aspect is about the price. What about the whole aesthetic aspects of this collection? There is something crass about the feature, and it attracted the readership it deserves.

Before the feature in the local newspaper, the sales of the Penguin Designer Classics in the bookstore has been limited to mainly serious book collectors. They are in the know about the Penguin Designer Classics, either though the internet or otherwise. Then the news broke on how you can make a profit on eBay on the Designer Classics, suddenly the bookstore where I work is flooded with customers who do not care what titles we have left. They don't care about the book. They also want to know the serial number of the sets we have, as they want lucky numbers.

I would have preferred it if the Books Journalist from our local newspaper had not run the story in the first place. It would have saved us much grief from these vulgar people.

Posted by darkorpheus on Saturday, December 16, 2006