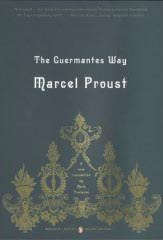 I finally finished The Guermantes Way. It took me about three months to finish this volume and it was the longest I've needed so far for the Proustian volumes.

As I've been reprimanded previously, I feel the need to indicate that this entry contains ***SPOILERS*** on the story of In Search of Lost Time. If you have not read the Proustian epic and wish to find out for yourself, please just stop reading here and now. My feelings will not be hurt.

In this third volume, the young narrator makes his entry into the upperclass society, through the Guermantes clan whose association he had sought so desperately. (In fact, at some earlier point of the story, he was virtually "stalking" the Duchesse Guermantes.)

Like Swann, has begun mingling amongst the aristocratic upperclass, an observer of their gossips, their petty bickering -- all the while living only on the surface, at the level of his styled hair and starched shirt.

But there is a distinctive entry of death into the narrative at this point. The death of the narrator's beloved grandmother takes place -- and we are informed in the introduction (no SPOILER alert here) that the death of the grandmother will carry into future narrative, part of the intermittent memories of the Proustian epic.

Then towards the end, we come abruptly into the confrontation of another death. Just before the Duc and Duchesse Guermantes depart in their carriage for a party, Swann reveals he is dying; his doctor does not believe Swann has more than a few months to leave. And in that moment of truth, the way of the Guermantes is exposed in its painful rawness:

"What on earth are you telling me?" the Duchesse burst out, stopping short for a second on her way to the carriag and raising her handsome, melancholy blue eyes, her gaze now fraught with uncertainty. Poised for the first time in her life between two duties as far removed from each other as getting into her carriage to go to a dinner party and showing compassion for a man who was about to die, she could find no appropriate precedent to follow in the code of conventions, and, not knowing which duty to honor, she felt she had no choice but to pretend to believe that the second alternative did not need to be raised, thus enabling her to comply with the first, which at that moment required less effort, and thought that the best way of settling the conflict would be to deny that there was one. "You must be joking," she said to Swann.

How does one become so used to living on the surface that one forgets the how to live with a heart, that made to choose between a party and offering comfort for a friend's pending death, one is paralysed?

Posted by darkorpheus on Tuesday, December 12, 2006

It seems to me like spoilers don't matter with Proust -- like I read for the plot! The plot obviously isn't the point! But, okay, maybe not everybody feels that way.

Yeah, I know. Plot isn't really the point with Proust, so I actually felt a tinge of irony putting up the spoiler.

Which may ultimately be the real reason why I put it up. I like the fact it's ridiculous.