LIFE | The Case of the Giant Jellyfish 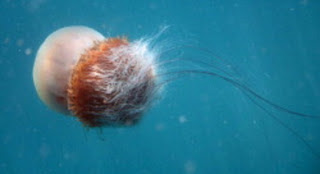 Giant Echizen jellyfish, have been appearing in massive schools off the Sea of Japan coastline and gorging on more palatable fare, like prized maguro tuna. Japanese fishermen are outraged at the impact to their livelihood.

So how do the Japanese solve the problem? In the most pragmatic way possible. They decide to eat the jellyfish.

It's so typically Asian.

According to official statement:

"Echizen jellyfish is actually a nutritionist's delight. It's packed with plenty of minerals, like magnesium, and absolutely loads of collagen good for the skin. And it contains almost no calories."

Posted by darkorpheus on Tuesday, December 26, 2006

I had no idea jellyfish ate tuna. Those Japanese though, very practical people.

My husband must have read an article similiar to this one a few months back, because he's been rattling on about how we're all going to be eating jellyfish for some time now.

Stefanie: Yeah, I have no idea what jellyfish eats. Don't they eat plankton? Like the whales do? It begs the obvious question: how do jellyfish chew?

And sfp: remind your husband:

"Echizen jellyfish is actually a nutritionist's delight. It's packed with plenty of minerals, like magnesium, and absolutely loads of collagen good for the skin. And it contains almost no calories."

Oh my, I have no mood to work. Why can't I be rich like Paris Hilton?

Cheers and season's greeting to all.