BOOKS | The Art of Detection 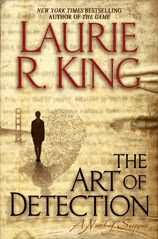 This post is long-overdue. I finished reading the book some time back, but just never got around to writing about it - as usual.

The latest in Laurie R. King's Kate Martinelli series, The Art of Detection features the usual set of characters that fans are familiar with: San Francisco homicide detective Kate Martinelli and her detective-partner Al Hawkins, as well as her life-partner, Lee Cooper. In this book we finally meet little 5 year old Nora - Lee and Kate's precocious daughter.

Since last we left Kate, she has settled into domestic life and juggling her police work with her duty to home. The character is at peace, which unfortunately seems to throw her and most of the characters into a blandness. Laurie R. King has the ability to write believable three dimensional characters with rich emotional lives - that is one of the reason she has such a strong following for her Kate Martinelli and Mary Russell series. In Art of Detection unfortunately, the characters are more pushed into motion than active protagonists.

Present time, San Francisco, the story opens with Detective Kate Martinelli going into the home of a murder victim, Philip Gilbert. What is disturbing is that the victim had set up his entire apartment like the interior of 221 Baker Street, with violin, fireplace, and bullet holes in the wall spelling the initial of Queen Victoria. It turns out the late Mr Gilbert was a collector-dealer in Sherlock Holmes memorabilia and he has recently acquired a typrwritten manuscript that is supposedly written by Sherlock Holmes himself.

The best part of Art of Detection is this mysterious manuscript, a short mystery story told in the first person by a male narrator of extraordinary deduction skills. Here is where fans of the Mary Russell series, especially those who have read Locked Rooms, will be excited.

I visit the Laurie R. King's blog from time to time, and my impression is that she is an intelligent, self-aware lady with a wry sense of humour. Here is the author playing on the consciousness of her own literary creations. Sometimes the characters you create seem to possess a life if their own and all you really are doing is acting as biographer for someone else's life. The crossover between the Mary Russell and Kate Martinelli in Art of Detection is playful, wry and very well-done. It is fun, and shows us how sometimes authors need to take a step back and not that themselves too seriously.

But one complaint: The Art of Detection pales in comparison to other Kate Martinelli novels, especially the wonderful first Martinelli novel, A Grave Talent (which won King the Edgar Award), and To Play the Fool, where we meet the most intriguing character King has ever created: Brother Erasmus - a living embodiment of the archetypal Fool, who buried within himself some tragic secret too terrible to speak of, that he could only communication in quotations.

A fan of Laurie R. King would find enough to enjoy the book, but I would not recommend it to newcomers. The plot is too conveniently tied up at the end, and there is none of the emotional engagement with the characters found in previously books. Even the victim, Philip Gilbert, is hardly a sympathetic character. I would suggest a newcomer to King try the abovementioned titles: A Grave Talent and To Play the Fool if you're interested in the Kate Martinelli series.

Or try the Mary Russell series, if you're more inclined towards Sherlock Holmes pastiche. In The Beekeeper's Apprentice (first in the series), in the year 1914, young, feisty Mary Russell meets a beekeeper and becomes his assistant in the world of mystery and intrigue. The Mary Russell series by the way, has always been more successful for King.

A little background: King has a BA degree in comparative religion and an MA in Old Testament Theology - all of which she puts in good use when she writes. Odd theological knowledge comes up when you least suspects it, and Mary Russell, protagonist of her Sherlock Holmes pastiche series, translates Sanskrit for leisure.

Another good King to start will be A Dark Place. It's a stand-alone, which features Anne Waverly, an esteemed university professor, who also works with the FBI on cult activities. (Here, King again puts her theological education to very good use) She goes undercover to unravel the truth behind a new fangled cult, the People of Change. A complicated and haunted character, Anne Waverly was previously a member of a cult herself, where she lost her family. Tragic, self-destructive, you feel for Anne Waverly as she gradually loses herself in her new assignment. The character of Anne Waverly was so compelling that I wish there was a sequel for her. But just as well. Sometimes a good thing is knowing when to stop.

Meanwhile, if you are already a fan of the Mary Russell mystery, check this out.

Posted by darkorpheus on Saturday, February 17, 2007