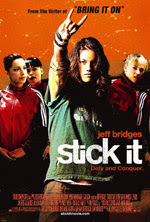 It was a slow night and I just needed some form of mind-candy. So I watched Stick It on DVD.

Stick It is directed by Jessica Bendinger, who also wrote the script for that Kirsten Dunst/Eliza Dushku cheerleading number, Bring It On. So you know what to expect from this movie - a feel-good flick centered around a young 18 year old female athlete who learns something important through her sport that is going to see her through adulthood. It's also a very good excuse to see athletic young bodies doing *stuff*.

As the story goes, Stick It has rebellious 18 year old Haley Graham (played by Missy Peregrym) getting in trouble with the law. The judge sends her to an elite gymnastic academy run by Burt Vickerman (Jeff Bridges, in a commonplace performance). As it turns out, Haley is actually a gymnastic prodigy who was on the World championship team. But Haley walked out of the competition at the last minute, thus causing her team to lose their chance at a gold. The world of competitive gymnastic never forgave young Haley for that infraction. 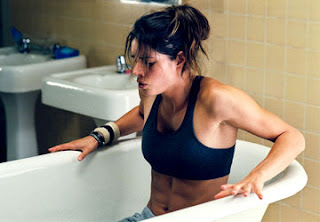 Forced to resume her gymnastics, Haley Graham trains to enter the gymnastic Classics. So the audience get a montage of Haley training, and a few scenes of her inmmersing her aching body into a bath-tub of ice. You get the idea she's working hard. Oh, and she has great abs. Very nice.

I am not familiar enough with gymnastics to acertain if Bendinger got it right, but the film does comment heavily on the judging criteria: a contestant starts with 10 points, and deductions are made for flaws in their execution. Haley comments that gymnastics is the search for the perfection that doesn't exist. Yet the way the film illustrates it, the judges are less concerned with perfection, but more concerned with actively seeking out imperfections and the penalty for them; it is not about how good you are, but how you fall short. Wait, sounds familiar? Yes, this is gymnastics as metaphor for life.

In gymnastics, one is rewarded for performing by the written rules. It tells you consistency is rewarded, and flash has no place on the mat. It encourages obedience, predictability and dullness. Spontaneity, originality and fire are suppressed, or otherwise penalized. Haley Graham is all flash and fire, and she is telling them to stick it. This is not a story about a female rebel who learns to play by the rules because in this case, the rules are unfair.

When an unfair deduction is made on a superb performance, Haley Graham and the rest of the gymnasts staged their protest by collectively forfeiting their turns. For the first time, Haley's intransgience has a purpose. They are standing up for something larger than themselves, and more important than medals. This is something we should be teaching our young people - not to just beat them over the head to obey rules and turn them into sheepish followers - but to nuture their natural intelligence and courage to stand up for what is fair.

As much as we want to laugh at the premise of the film – elite female gymnasts reaffirming life through their sport – if you take a good look at the moves you will realise gymnastics is no joke. It takes a tremendous amount of training to be able to do the things these athletes do. And lot of hard work, discipline, sacrifice, injuries and pain. Jessica Bendinger knows what she is doing when she wrote Bring It On and Stick It. Whether it is cheerleading or gymnastics, the mental and physical demands of both sports have the potential to build tremendous character in a person. If we teach them right.

Both films are fun energetic celebration of female athleticism and sportsmanship. Bring It On too, reminds you that winning is about more than a trophy. In the end, the better team did win - and it isn't Kirsten Dunst's team. Yet coming in second place may be sweeter for Dunst's team because this time they did it on their own merit.

I enjoyed Stick It, though I admit I probably enjoyed Bring It On more because of the Kirsten Dunst and Eliza Dushku factor. Some of the best bits of the film is of course the poetry of the gymnastics. It is beautiful what the body can do. I was awed by the cheerleading in Bring It On, and I was even more impressed by the gymnastics in Stick It. Wow. Handstands. The strength, the grace, the utter control of body and balance. Did I mention walking handstands? And watch out for Wei Wei when she does her routine near the end – it makes you want to dance.

Posted by darkorpheus on Saturday, February 03, 2007

There is a fascinating non-fiction book by Joan Ryan called Little Girls in Pretty Boxes. It's about figure skating, and although it is a book, it touches on the same themes you mention those two films do. You might enjoy it!

Sometimes I am almost ashamed there are people who read these frivolous airheaded posts of mine. *grin*

OK, this isn't about gymnastics, but have you ever seen Drop Dead Gorgeious (the movie), with Kirsten Dunst? It's hilarious.

Oh! "Drop Dead Gorgeous" - I heard about it, but never saw it. Oh, it stars Ellen Barkin!

I lurve Ellen Barkin - she was so good in "Switch". Oh, and Allison Janney.

There's great satire mileage on films like these, you know.