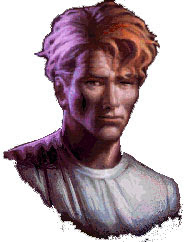 I'm not sure if anyone out there still remembers the computer game Gabriel Knight, released by Sierra On-Line (the company responsible for King's Quest, Leisure Suit Larry and Half-Life)?

In Sins of the Fathers, you play Gabriel Knight, a New Orleans bookstore owner/unsuccessful writer/successful "love 'em and leave 'em" womaniser, started having a series of disturbing nightmares of voodoo and strange symbols. Through the game, he realised that he is the last in the line of a German family of Schattenjagers - Shadow Hunters. To save his soul, he has to become a Schattenjager, and atone for the betrayal committed by one of his ancestors. In his journey, Gabriel is assisted by his beautiful and very intelligent (but of course) and witty friend, Grace Nakimura. There is some sex, some gore (a character has his heart cut out for a sacrifice) and an alternative ending.

The Beast Within has Gabriel Knight coming to his new role as Schattenjager. He is uncertain about his duties, and the darker side of him is rebelling against the duties of the Shadow Hunter. Jane Jensen wrote a story about werewolves, interwoven with a story about King Ludwig II of Bavaria, and featuring a lost Wagner opera.

The third installment was exceptionally powerful. For Blood of the Sacred, Blood of the Damned, Jane Jensen centred her story around the mystery of the Knight Templars, the Priory of Sion, the bloodline of Christ, with vampires - and our sardonic hero, Gabriel Knight in the middle of it all. She researched the material thoroughly, and wrote a more intelligent plot with more credible characters than Dan Brown ever did.

I loved all 3 Gabriel Knight games, but the last game was my favourite; Jane Jensen wrote a good story, with a heart-wrenching ending for the fans of Gabriel Knight and Grace Nakimura.

The series had a huge international fan base and we communicated online - through the fan forums, the fan websites, and there was even a weekly scheduled iRC chatroom. (There was one time on iRC , some of the GK fans from Italy, Netherlands, India, Singapore, England and Mexico started to discuss the World Cup - and the Americans had no idea.)

I was also part of the Gabriel Knight fanfiction community back then. I wrote a fanfic of my own, and even started a small fanfic archive on GeoCities for the stories I liked. We started a proof-reading mailing list for fan-writers who wanted some feedback on how to improve their stories. We discussed Gabriel Knight fanfics we would like to read. We even wrote slash. We were fans who had fun sharing our interest for a computer game that inspired our imagination, and whetted our appetite for horror mysteries with a paranormal twist. We made friends, us all geeks and loving it; those were the days of X-Files and Gillian Anderson was a sex-symbol.

After graduation, I found a job, and as they say, I put aside childish things. I stopped updating my GeoCities website, where I kept the Gabriel Knight fanfics. After a while, the site was removed, and I forgot all about Gabriel and the story I wrote. I simply stopped writing stories, something that used to keep me sane even though I wasn't very good at it.

Posted by darkorpheus on Friday, February 09, 2007

Is that illustration of Gabriel Knight? Kind of looks like Patrick Swayze on acid to me! (Don't ya think?) :)

Yup. That's Gabriel, as he was portrayed in the first game, Sins of the Fathers. GK has a very big female fan-base. Something about a handsome, rakish New Orlean bad-boy that just pulls in the fans.