It's always a dilemma, isn't it? All these new books that we have not read –- but there will always be those special books we have read, loved, and promise to re-read. Yet, somehow we never get around to it. We make excuses for not re-reading. (It's complicated -- usually involves another book -- or more.)

Since 2008 shall be the year of reading more deeply, and slowly, I'm taking time to talk a little on one of the titles I'm looking forward to re-reading in the coming year: 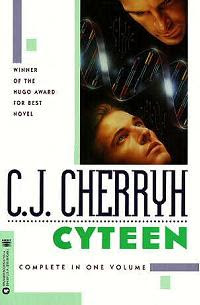 I first read C.J. Cherryh's Cyteen during my first (or was that my second?) year in the university. An undergraduate that reads outside the syllabus? Some of my lecturers would be shocked. Back then, I was reading harder than I was studying.

Cherryh has written several science-fiction novels, almost all of them linked in her wider, Alliance-Union universe. These stories are set far into the future where faster-than-light travel (FTL) has led to the development of space stations and merchant vessels –- as well as planetary colonisation. Humans manned these stations and merchant ships, but as generations spend their lives exclusively in space, they evolve, developing whole societies of stationers and merchanters culture -- with their own unique psychologies and problems.

Cyteen is similarly set in the Alliance-Union universe, but it focuses on the planet Cyteen, which was colonised about a century ago. The manpower for colonisation was bred out of womb-tanks, and each generation continued to breed and work. Education was through "tapes" -– learning through sublimation, which allowed skills to be learnt in sufficient depth and speed. All of these -- the breeding facilities and the education tapes -- all of them came from the Reseune labs, directed and devised by Ariane Emory -- who had stood in power for the past fifty years.

Ariane Carnath-Emory -- brilliant scientist, shrewd politician –- a larger-than-life power-player, dark and monstrous -- as much admired as she was hated. Was. Within a few brisk chapters Ariane Emory is assasinated by person unknown. The novel spins all at once into a political thriller, a murder mystery, and a psychological study.

Even as the society of Cyteen is shocked by the assasination, it is revealed in the details of Ariane Emory's will that she had prepared for her genetic material to be cloned after her death – but unaltered. Most importantly, the clone shall be brought up with childhood experiences as close to Ariane Emory's as possible. It is a brutal experiment –- all of it for the sole purpose of recreating a genius the likes of Dr Ariane Emory by replicating genetic and environmental variables in the clone's upbringing. In one of the many purposeful "abuse" -- Dr Ariane Emory was orphaned at a young age when her parents were killed in an accident. To recreate the childhood trauma, the clone's foster parents were taken away at the appropriate age and told her parents were dead. It was a horrific idea -- that all the most significant and painful moments of your life were all scheduled and executed with calculated efficiency: first birthday party at four, lose both parents at eight, lose virginity at eighteen to young man pre-checked by the doctors -- you get the idea. Imagine a childhood that is entirely fabricated; nothing is authentic or left to chance.

While the emotional part of me recognised the horror behind this sort of experiment, and the callousness behind the sytematic infliction of emotional pain on a child -- on an intellectual level, I also understood it. Without intending to, I have begun to identify with the dead Dr Ariane Emory.

Dr Emory left her clone a machine which contains a series of recordings in which she discusses with Ari II her experiences, and where she teaches Ari II what could not be taught by anyone else. Afterall, if Ari II's experiences are programmed to mimick Ariane's own childhood, who else would know what the clone is going through better than herself? It is in these recordings that a more human and compassionate side of the original Ariane Emory reveals itself – which further complicates the understanding of the character whose death precipates the entire plot.

I also believe, it is in these recordings where Ariane Emory refines the education of Ari II -– by drawing out the defining quality of Ariane Emory herself –- her will. As the state controls the circumstances of her upbringing and birth, they will eventually want to control her. It will be her own strength of will that frees her from her would-be jailors.

Towards the end of the novel, young Ari II matures, and destiny manifests itself. She makes her first step into the politicial limelight, showing herself a worthy successor to her legendary genetic mother. As Cyteen embraces her gladly -- such is the power of myth -- Ari II soon learns she has also inherited Ariane's enemies; there is still the mystery of Ariane's unsolved murder. Most of all, there is also a darker implication of the Machiavellian manipulator Ari II might become.

I was an earnest Psychology and English Literature double major then, back in my university days. I was intrigued by Cherryh's novels that uses science fiction as the metaphorical and imaginative template to explore ideas concerning human psychology and sociology. Cyteen was the novel that most fascinated me, because of the complexities of the characters of Ariane (the original) and Ari II (the clone). Our personality and character are "hardwired" into us through our genetic blueprints and environmental influences. But how far can we manipulate these facors to custom-make a desired human template? What about that elusive wildcard -- the human will?

Cyteen was the first novel that drove me to email an author to ask if there was going to be a sequel. (Was I geek or what?) The ending left one wanting more, as the destiny of Ari II had only begun.

Cherryh did write back. She said, yes, there will definitely be a sequel. She just needs to write it. That was about 10 years ago.

On Cherryh's "kind of" blog, there was an entry back in September 2007 where she wrote that the final draft for Cyteen II was finally finished. The draft was under-going editing and would probably need some re-writes. I really hope to be able to see it later part of 2008. Or 2009.

Note: I wrote this post earlier in December 2007, before Carl invited fellow book-bloggers to join him in reading science fiction for the months of January to February 2008. The timing, couldn't be more perfect. I wonder if there are any more C.J. Cherryh fans out there reading her books at this moment?

The Sci-Fi Experience 2008 is not a challenge in the traditional sense -- more a friendly invitation where everyone just share their experience of reading some science fiction related books. You don't need a book list -- though you're welcome to have one if you so desire. You can find other bloggers' reviews here.

Posted by darkorpheus on Sunday, December 30, 2007

It is quite possible that I may pick this one up to be my first C.J. Cherryh experience sometime in 2008. I am wanting to try to read more award winning (Hugo, Nebula, Locus, etc.) winners in the coming year. We'll see if my ambitions play out! ;)

I've wanted a sequel to Cyteen since I first read it twenty-some years ago. (Took me four readings over fifteen years to realize whodunnit and why.) So glad to hear there finally is one!

A undergraduate that reads outside the syllables? Some of my lecturers would be shocked.

Try "syllabus," so you don't look like an idiot.

Anonymous Person Who Spell-Checks - Duely noted, Sir/Madam. The amendment has been made.

Your advice could have been made without being quite so rude, though.