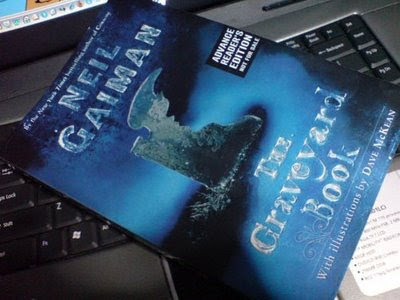 Thank you to the nice people at HarperCollins for this Advance Reader's Edition of The Graveyard Book. It was a breezy, fun read, and I should have finished the book earlier - but life interfered with my reading plans. *sigh*

The story begins on a cheery note - with a family massacre. The father, mother and daughter were killed in their sleep. The youngest son, a toddler, survived because he was the sort that liked to crawl out of his crib and wander. His adventurous spirit saved him, as his wandering brought him to a graveyard where he was saved from the murderer in pursuit. The late Mr and Mrs Owens, who had no children when they were alive, adopted the young boy, who was named Nobody Owens. What better name is there for this child, who is living but lives amongst the dead? So the little boy is named Nobody, although they call him Bod, for short - because Nobody is kind of a stupid name, no matter how apt it is.

Because of the unique circumstances of the boy's existence, he also gains a guardian: Silas - the enigmatic figure who is neither of the living or the dead.

Little Bod grows up in the graveyard where he is loved and cared for by the dead. He is educated in the magic of Fading, of Fear and Dreamwalking - and on the whole he is happy. Except Bod has never been the kind of boy to stay still. He starts to venture out to the world of the living, even attends a real school - where the living seems a nastier place than his graveyard home. On top of it all, Jack, the man who killed his entire family, comes closer to locating Bod, and to finish the job.

This is the story of Bod, and Gaiman takes his time to explore the magical world of the graveyard denizens, and what happens when the world of the living and the dead collide. Gaiman knows his myths and fantasies well enough so that these elements in his story reads like familiar memories of stories we have been told before. He proves again that what he does best is how he uses the old stories, gives them a good spin so that they become fresh and new when he tells them in his own voice.

I admit, there are some scenes in the book that feel like "fillers" to the plot. These are the moments that feel like they do nothing more than to provide Bod an adventure. They slow down the momentum of the story a little - but they are never boring. I would have preferred a leaner book, one with a tighter plot - but that is because I am an impatient reader. But on the whole, it was an enjoyable read without a dull moment.

Afternote: I was re-reading what I wrote about The Graveyard Book, and I don't feel like I did justice to the book. I'm not good at writing about a book without spoilers.

There are a few things I would have liked to mention, but that might give away some of the suspense and mystery when you guys read it yourself. So, we'll discuss it on your blogs when you guys are done, okay?

You have officially made me even MORE impatient for this book to come out if that was indeed possible! Sounds great! I really didn't know all that much about it before, but it sounds quite good. I guess there's always going to be a bit of filler in any book, but it sounds like he got around it pretty well. Thanks for the great review D-O!!

Yup...you managed to make me even MORE impatient too!

Me too, and now all I have to decide is which edition to buy; or perhaps I should just get all three.......

Chris It's an Advance Proof, so the version I read may not be the final published version. You guys will be reading the polished version.

Did I mention they did not include Dave McKean's artwork in the proof? So you guys will be getting the art with the story. :)

Nymeth Don't worry. It will be in the bookstore before you realise it.

Bride of the Book God I swear, your handle is way cool. One has to pronounce it with a deep, looming voice...

You serious about getting ALL the version? Really?

I'm certainly thinking about it, but probably won't, the little Scottish voice in my head(not at all deep and booming I'm afraid) will point out that I could be spending that money on other, just as worthy books......

Bride of the Book God Good for you. Sometimes I think a book first of all, needs to be read. A collectible edition is nice and good, but it should also be read.

Looking forward to it!!!!

I didn't know Gaiman had a new book coming out. I think you wrote about it just fine. I can hardly wait to get my own copy!

Carl You are going to buy 2 editions though? :)

Stefanie They classify it under children's - though they are also releasing a collectible edition, and an adult cover. They really want to milk the market for all it's worth.

Watch out for The Graveyard Book in October.