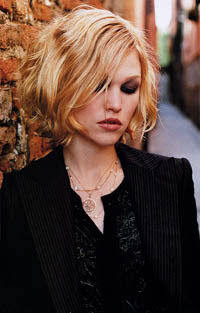 Just a bit of casting news. A kind of film and book intercourse, if you like:

If you've read Sylvia Plath's The Bell Jar, do you see this young woman on the right playing Esther Greenwood?

In an interview with MTV News, Julia Stiles talks about playing a character heading towards breakdown. I look forward to catching the movie, if it comes to the local cinema. I think Julia Stiles is one of those refreshing, intelligent young actress who just never seem to get a lucky break from Hollywood. She always seems better than the roles she was given, sort of like her character in Mona Lisa Smile - who is smarter than most people, who could have gone to law school, but just didn't.

As for Sylvia Plath, she is certainly a writer that captured the modern imagination. I like some of her poetry, although I confess I preferred the visceral, masculine energy of Ted Hughes's earlier poetry (I loved Crow. It was naughty with a shamanic lyricism) to her somewhat melodramatic style. But my preference for Ted Hughes is something I usually do not discuss; the Sylvia Plath cult often attracts rabid harpies that would scratch out the eyes of anyone who even remotely enjoys Ted Hughes's works. I say that because I had the misfortune of being set upon by one of these Plathian Harpies. It was unpleasant - and I might add, a little insane? Since then I try to avoid people who profess to an unnatural passion for Plath.

Right now I hope Julia Stiles can pull off her role in The Bell Jar.

Some Fantasy Casting: My ex and I used to play this game: if we could cast any actors or actresses dead or alive in a movie of our choice, what movie would we make? One of my choices is to have Julia Stiles and Leonardo Di Caprio play "identical" twins for Shakespeare's Twelfth Night. Can you just see it? 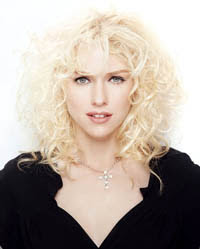 Now for the Harry Potter readers: Can you see Naomi Watts as Narcissa Malfoy? According to the Courier Mail, Watts has just signed on to play the wife of Lucius Malfoy, mother of Draco and sister to Bellatrix Lestrange (Their mother probably was friendly with the milk-man or something.)

The Harry Potter movies always seem to get it right with their casting. Even when the actors have very little to do, or they get only 5 minutes screen time, they can still just stay onscreen and just embody the characters. I can't even begin to imagine anyone else besides Alan Rickman as Snape anymore. And is there anyone in the world who can out-Bellatrix Helena Bonham-Carter? 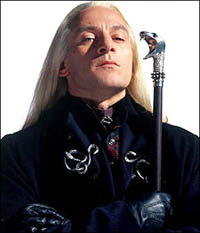 I'm looking at Naomi Watts's milky skin and her pale blondness against that long silky blondness of Jason Isaacs. I think it's a match made in hairdressing heaven. There's a lot of great blonde hair in the Malfoy family. (I bet even their dog is blonde.) They should go do shampoo commercials together.

Lucius Malfoy: "I'm too sexy for my hair."

Yes, it's a frivolous post. It's that kind of day.

I'm ridiculously excited to hear that Julia Stiles is going to be our lead in The Bell Jar. She must have a particular affinity for the book. She was holding it rather obviously in a scene from 10 Things I Hate About You. Love her!

And I think Watts will make a great Narcissa. Very blonde indeed.

Lucius Malfoy: "I'm too sexy for my hair." has my cracking up! Good pick for Narcissa. And I agree Helena Bonham-Carter embodies Bellatrix. I didn't know Bell Jar was being made into a movie. Julia Stiles looks like a good choice.

I LOVE Julia Stiles. I really look forward to seeing her in The Bell Jar.

Naomi Watts as Narcissus sounds about perfect. Who is the casting agent for the Harry Potter films? He/she deserves an Oscar.

OMG your post seriously cracked me up. Between the 'playing with the milkman' comment and the one about the shampoo commercial I was barely able to type this.

P.S. Mom and I love Stiles. One of the few actors of today who actually have a brain.

i think julia styles could pull of a sylvia plath - definitely. a lot better than gwyneth paltrow's wilted moaner.

plath was broody and not the happiest of little girls, yes, but she had fight too. i think styles could embody both those qualities (or is it "all three of those qualities"?) very well.

i know what you mean about the ted hughes thing! i've definitely got the sense that i dare not even mention his name, lest i get lynched! :) which is a shame, realy, as he's very good. i particularly like his "iron wolf" collection.

i'm personally quite a fan of both, although i agree with your assessment of them.

I love Julie Stiles. 10 Things I Hate About You is one of my all-favorites, just because of her! She also made a fantastic Desdemona in the O movie based on Othello. Josh Hartnett was also fantastic as Iago (Hugo, I think in the movie).

I hadn't heard about The Bell Jar movie. Wow. I can see Julia Stiles doing this. Must remember to look for this movie when it comes out! And, yes I'm another one who loved 10 Things I Hate About You.

I've never read The Bell Jar, but I do like Julia Stiles as an actor. And Watts will really look the part.

Wow. I know I like Julia Stiles, but with all the raves, I think I need to check out 10 Things I Hate About You.

Yes, I never caught that movie. Can you believe it?