I've posted something on this before, but I'm going to post it again, but this time with trailer.

The Sarah Connor Chronicles is one of the most anticipated TV series coming soon - depending on where you live. 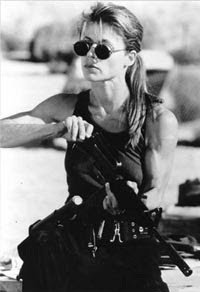 When I first watched the second Terminator movie, I felt for Sarah Connor. In the first movie, she was just an ordinary, disorganised young woman who is just a nobody you might feel sorry for but ignore. By the second film though, she became something else. The change is heart-rending but also magnificent, because you see how the character has been broken and hardened by the knowledge of what is to come. While the rest of the world can rest in ignorance, Sarah Connor KNOWS. The immensity of her knowledge is not a burden she could share - even her son, the Destined One, could not believe her. When fate thrusts itself onto you, Sarah Connor did what was necessary. No whiny "Why me?" She buffed up, suited up, and kicked ass.

Lena Headey of course, does not have the sinewy buffness of Linda Hamilton from the second Terminator movie. (Such is the pity. Meanwhile, let's post a picture of a T2 Linda Hamilton for the sake of nostalgia.) All that aside, Lena Headey has the awesomeness of being Lena Headey. This means elegance, beauty and bone-structure to die for. Is that enough reason to watch the Sarah Connor Chronicles? Duh! Of course! If that's not enough, all Firefly fans can tune in to watch Summer Glau as a Terminator sent to preserve John Connor. That means Summer Glau gets to be that white-hot dynamo of monstrous violence ― again! We get to see Summer Glau thrown through walls and kicking ass (in the nude, if I saw it right from the trailer), with shiny metal pieces being pulled out of her! Yay!

I leave you with the trailer. I hope to catch the show soon.

The Sarah Connor Chronicles on FOX
Uploaded by SeriesBlog

Wasn't Linda Hamilton married to the director and then he cheated on her? I don't WHY I thought about that. LOL.

I haven't heard anything about this so I don't know if it's playing here but I did like the Terminator movie. Action movies are my fave. :-)

Oh yes! But by the time she married James Cameron, Linda Hamilton was already Wife #4. The man may be good at making movies, but he seems to have a problem staying faithful.

I loved T1 & T2 - never watched the third movie though - because I did not want my fond memories of the first movies to be spoilt by the third installment.

sarah connor's character is so cool and strong that she really deserves something which puts her more in the spotlight.

lena heady looks very good from the trailer. she's got that toughness that hamilton had.

Jean Pierre Lena Headey had more of that maternal protectiveness about her - but I'm curious if she's going to work out for this role. Not looking very toned in that trailer - but that's already gorgeous.

I saw the Bionic Woman trailer before Sunshine this weekend and was really surprised by how interesting it looked. I'm hoping both shows are done well and stay around for awhile.