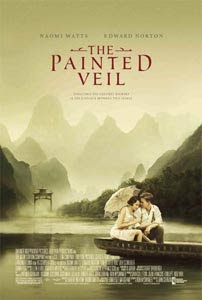 I have been meaning to write about W. Somerset Maugham's The Painted Veil for a while now, but I have not been particularly inspired to write something worthy of the book. Here, it is my own limited literary resources that fails me, not the subject.

The protagonist, Kitty Fane is a vain, shallow socialite with some beauty. She is married to Walter Fane, a bacteriologist working in Hong Kong who is Kitty's antithesis: brilliant, intellectual, socially withdrawn. It was a marriage of convenience, at least for Kitty ― who just wanted to be married before her younger, inferior sister. Walter however, normally a quiet, dignified gentleman, overwhelmed Kitty with his awkward but intense proposal:

... She had been proposed to often before, but gaily or sentimentally, and she had answered in the same fashion. No one had ever asked her to marry him in a manner which was so abrupt and yet strangely tragic.

Shallow and self-absorbed, Kitty was unable to see how Walter is desperately in love with her. She was bored by a husband she could not understand nor love. The first time she begins to feel anything remotely tender towards Walter was when she falls in love and starts to have an affair with Charles Townsend, a man as self-absorbed as Kitty. In her love for another man, she learns a little of how her husband might have felt towards her, and it allows a "sudden sympathy for the love that Walter bore her."

But we are responsible for the hearts we tame. When Walter learns of the affair, he insists on bringing Kitty with him into a region stricken by a cholera epidemic. When Kitty realises her lover would not jeopardise his political career to marry her, she agrees to follow Walter into the heart of the cholera epidemic. It was an act of passion that verges on destruction. In a manner, Walter wanted to kill Kitty, and in her own fashion, Kitty was willing to let him. Yet their journey would prove to be the road to forgiveness.

In the midst of suffering and death, something shifts gradually within Kitty. She sees the body of a dead beggar. She meets a group of Catholic nuns who chose to stay in the cholera stricken area. It is the nuns, and especially the dignified Mother Superior, who most moves her and shows Kitty how small she truly is. The tiny world of the socialite that Kitty knew was empty. The nuns, with their lives of simplicity and work held more meaning than anything Kitty had ever known:

There was a barrier between her and them. They spoke a different language not only of the tongue but of the heart. And when the door was closed upon her she felt that they had put her out of their minds so completely, going about their neglected work again without delay, that for them she might never had existed.

The spiritual growth of Kitty Fane is subtle and gradual in the novel, but all real change starts slow and small. Towards the end, while Kitty could not learn to love Walter as he had wished, she moves towards an empathy that she had not been able to feel in her previous life; Walter loved her, even when he had no illusions on how she was "silly and frivolous and empty-headed." She too, in her affair loved an unworthy man. Walter and Kitty both, in their passions, raised their lovers on a pedestal and now must suffer the truth. Kitty is not the intelligent one. She is not as educated as the brilliant Walter, but she is the one who came closest to insight:

There was only one thing she could do for Walter now and that she could not think how to. She wanted him to forgive her, not for her sake anymore, but for his own; for she felt that this alone could give him peace of mind. It was useless to ask him for his forgiveness, and if he had a suspicion that she desired it for his good rather than hers his stubborn vanity would make him refuse at all costs (it was curious that his vanity now did not irritate her, it seemed natural and only made her sorrier for him) ...

Was it not pitiful that men, tarrying so short a space in a world where there was so much pain, should thus torture themselves?

Kitty's gradual path to realisation and peace came from a recognition of her own insignificance amidst a greater universe. The moment seems to come unbidden, and almost innocent ― yet significant in the power it has over Kitty's imagination.

Then, on a sudden, for no reason that she know of, from the depths of her unconscious rose a reminiscence of the journey they had taken, she and poor Walter, to the plague-ridden city where he had met his death: one morning they set out in their chairs while it was still dark, and as the day broke she divined rather than saw a scene of such breath-taking loveliness that for a brief period the anguish of her heart was assuaged. It reduced to insignificance all human tribulation.

All these, in a moment of natural beauty; An eternity in an hour. That is epiphany, and it strangely reminds me of a story within the Mahabharata. I first heard while watching the Peter Brook production of the Sanskrit epic.

In the Indian epic, the great warrior Bhisma, grand-uncle to the warring Pandavas and Kauravas, laid dying on a bed of arrows. He begun to tell a tale of a man walking through the forest who realized a tiger was afterhim. He fled but fell through a tiger trap but caught himself on a vine so that he didn't fall all the way down. Another tiger was in the trap and leapt to make the man his prey while the first tiger that followed, clawed from above as well. And at the same moment, a white mouse and black mouse began to gnaw at the vine supporting him. In the midst of this life-and-death circumstances was a bee hive dripping honey, just in reach. The man reaches for the honey, and it was the sweetest thing he ever tasted.

This story from the Mahabharata seems to me, to recapitulate the moment of Kitty's awareness. It is what both stories have to say about reaching for beauty and sweetness in the moment of death and losing all.

There are some books that strike such a perfect chord in their readers that once you read it, you are converted for life. You shall go to your grave as a devoted fan of the writer ― or at the very least, you are convinced enough to seek out other works by the author.

This was how it was for me with Graham Greene. I first read Brighton Rock for a class in the university but I was left somewhat indifferent. It was years later when I picked up The End of the Affair that I came to admire his works.

Reading The Painted Veil has a similar effect on me, I now want to actively seek out other Somerset Maugham titles.

I'd like to get around to reading Maugham one of these days. He seems to be one of those highly thought of writers that don't get the attention they deserve.

I remember the Mahabharata and the Ramayana! Well, I remember reading them but my memory is too crappy to remember details. LOL.

Didn't this get turned into a movie? Or am I imagining things? LOL.

Stefanie: I thought so too - that he's one of those writers who deserves more highlight. But I always thought I will start with Of Human Bondage, because it's supposed to be THE Maugham to read. It took a film adaptation with Edward Norton and Naomi Watts to get me to finally read one of his books. I am such a pop-cultural victim.

Mailyn: Yup, you're right. I picked up the book because it had the movie cover with Watts and Norton. *ahem* I am a fan of Norton since Fight Club and American History X. Love his intensity.

aaaaaaaaaaarrrggggggh! Another author I want to read but haven't yet! Should I stick him on my "Unread Authors" challenge list? I've got Of Human Bondage on my TBR shelf.
Thanks for that really great review of The Painted Veil!

very cool review. you get across just how much you like this book!

it sounds like a deep and very beautiful story.

i'm personally quite curious about graham greene - i saw and really enjoyed "the quiet american", so definitely want to try and get around to reading some of his books.

Bybee: Thanks. I have Of Human Bondage too - unread. The story of my life. *sigh* I really want to get to it *soon*. Maybe next year.

Mailyn: Afterall a while, all these epics are all about the same thing, aren't they? Good vs Evil. Just like Stars Wars, Lord of the Rings, er - Harry Potter.

Jean Pierre: Actually, re-reading what I wrote, I wasn't very happy with the quality of the writing. The book is better than what I could say about it.

Sometimes I just wish I am a better writer and could articulate better the things I feel.

As for The Quiet American - did you watch the film version with Michael Caine and Brendan Fraser? I felt it was well done. Caine had that right amount of detached cynicism, and Brendan Fraser that fresh-faced earnestness that borders on fanaticism.

And the book was so powerful - Greene was a penetrating observer of human nature, and more than anything else, he was a searing commentator on our moral ambiguities. He never saw the world in black-and-white, only different shades of greys. In his books, we are all compromised in one way or another. And the film captured the essence of the book, I thought.

Can you just tell how much I loved The Quiet American - both film and book?

yup - thats the one i watched. i thought it was a very subtle film and i really liked how the characters were so deep and ambiguous.

its particularly cool for you - its quite rare to enjoy a film based on a book you like a lot!

from the film i got some sense of how insightful he is of people - yeah, i think i'll definitely be reading some of his.