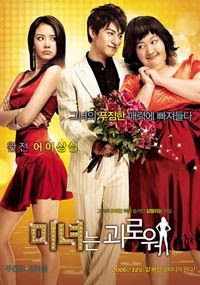 I had fun watching this Korean romantic comedy, 200 Pounds Beauty. It was a major box-office hit in Korea, and it did well in the local cinema too. Although I missed it on the big screen, there is no escaping the movie - one of my colleague has the soundtrack as the ringtone on her mobile phone. The popularity of the film is curious, and as a cultural phenomena, worth examining.

Ben Affleck was once quoted as saying that Gwyneth Paltrow is a skinny girl with a fat girl inside. I wondered if the popularity of this film is due to the fact that deep down inside everyone is a fat girl desperate to be loved. Hence something in this Korean movie touches these deeply-seated desires.

The story goes like this: Female protagonist Kang Hanna has a beautiful voice but because of her weight she could only be the lip sync vocalist for pop-star Ammy. She is in love with music producer Han Sangjun, an ambitious man who is appears to be just using Hanna. All the while Hanna is singing, she is really singing for Sangjun.

One evening, Ammy humiliates Hanna, which leads the latter to a drastic decision tpo undergo full body plastic surgery. So, with a quick montage, the Ugly Duckling is transformed. (The audience get a Korean cover of "Beautiful Girl" as background music.)

So the stage is set - the lowly fat girl becomes a slim beauty, and she auditions for Han Sangjun, posing as a Korean-American girl, Jenny. With her natural singing voice and newfound physical beauty, she wins a singing contract. But all this comes with a price, because she cannot allow anyone, including Sangjun to know that she was the fat, ugly Hanna who had full-body plastic surgery. So Hanna/Jenny lies to everyone, denying herself, denying her father, and in the process loses her best friend and herself.

Yet in spite of her efforts at concealing her fat, ugly history, Sangjun still finds out Jenny is Hanna - through a song Hanna wrote, which Jenny sang - a song Hanna wrote out of love for Sangjun. Soon Sangjun starts avoiding her, and Hanna/Jenny learns love eludes her even when she is beautiful - and the heartbreak hurts more than plastic surgery.

Personally I always found programmes like Extreme Makeover deeply disturbing. I could never bring myself to believe plastic surgery is the solution to making others love us more - which was the reason I refused to watch it when it was first screened in the cinema. Also, there are some scenes where we see people being unkind and mean to Hanna, and I don't like to watch meanness onscreen; I see enough of it in real-life.

But I'm glad I finally caught 200 Pounds Beauty on DVD. This is of course a romantic comedy and so we demand the predictable crowd-pleasing elements. But the film does try to go beyond the predictable "Ugly Duckling transforms to win the love of the Prince" story. I imagine if the film was produced by some B-grade Hollywood director, we will have the neat happy ending where the former fat girl and the handsome lead kiss and fall in love. But there's a slightly different ending in this Korean film: The female protagonist goes on to a successful career as herself, Hanna - but she's no longer infatuated with the male lead. Instead there is a hint of a growing admiration from the guy. It's like he is seeing her with fresh eyes, but he can't pin down what is it exactly; It's not her looks, it's not her voice. It's something else. I'm going to offer my take on what it is:

Earlier in the film, as Hanna/Jenny attempts to sex up her performance to seduce Sangjun, all she got was perplexed indifference from the guy. He tells Jenny she cares too much about how she looks. Then he plays for her a video recording of Fat Hanna singing, and he asks her what she feels about Fat Hanna's performance.

"She sings with her heart," replies Jenny/Hanna, and she should know. Sangjun of course agrees, and he tells Jenny/Hanna that she is not even half of Fat Hanna.

This is the bit that tells me 200 Pounds Beauty is more than a Shallow Hal-type of movie. It isn't a movie about a fat girl who finds love by losing weight - as I had thought it was. Right from the start there were indications that Han Sangjun saw something true and beautiful in Fat Hanna. His kindness to her isn't a facade. He does care for Hanna, the real Hanna. Somewhere in this good-looking guy is a genuine soul that sees the Ugly Duckling for who she is, and he likes her for it. This is why he was able to deduce Jenny is Hanna - because he sees her. And at the end, when Hanna stops pretending to be Jenny, it is Sangjun who is drawn. It isn't so much that he's seeing a new Hanna - but rather, he is finally seeing the true Hanna as all that she was meant to be.

This film doesn't just have Ugly Duckling transforming into Swan. This film also has the opportunistic guy revealing himself worthy to be the Prince. The transformation goes both ways. Not many conventional Hollywood romantic comedies consider both side of the story.

Finally, another reason why the film is so enjoyable is the soundtrack. It is mainly Korean covers of familiar American hits by Janet Jackson, Belinda Carlile and Blondie, but they use the music effectively.

This is the Korean version of "Maria" on the soundtrack of 200 Pounds Beauty. (Korean group, Loveholic has been credited for this version):

Besides a good fun time, 200 Pounds Beauty also made me nostalgic for some great music that I never tired of. Here is the MTV for the original "Maria", performed by Blondie. Even at 62, Deborah Harry still rocks.

I LOOOVE Korean movies !I also love their dramas. AWESOME. I also love Hong Kong and Japanese movies. Oh and Chiniese dramas are good but they tend to be looooong. LOL.

this looks very cool. its also nice to see that they aren't afraid to make a romantic comedy with some depth.

Mailyn: I haven't seen many Korean movies - but I've liked the few I've watched - probably because they usually come with great recommendations.

I agree with you on Chinese dramas - I think it's because of the cultural, which has a slower pace of life, hence their dramas can afford to be s-l-o-w and still maintain viewership.

Jean Pierre: I think that's why this comedy is so successful - it's actually a cut above the usual fare. And it has a great soundtrack. :)

I haven't watched this one yet. This week, my students gave me recommendations for Korean movies to watch. I'll translate the list and send it to you, if you like.

Wow, sounds like a very good film. The only Korean film I have seen is Oldboy, which I enjoyed...but man is that one dark revenge film!!!

Bybee: If it's not too much trouble for you, I wouldn't mind checking out somemore Korean movies. Might have to find out if it's available on DVD though.

Carl: Ah, Oldboy was fun - in a warped way. And the ending made me go hmm... I do like how Oldboy ends up as an exploration of memories and the mind, and the possibility of suggestion.

If you have time, I recommend watching the other two titles in the Revenge Trilogy by the same director. In the order they were made: Sympathy for Mr Venegence, Oldboy, & Sympathy for Lady Vengeance.

Among all the 3 movies, the final one, Sympathy for Lady Vengeance left the deepest impression. It was visually rich and textured. It's also accompanied by a beautiful Vivaldi soundtrack that makes it seems more like "Symphony for Lady Vengeance" instead.

But there is a common theme in all three Revenge films: vengeance is often more bitter than sweet. What is most important is the possibility of forgiveness which we may never find.

Thanks, I'll check those out!