YOGA | Meditations from the Mat 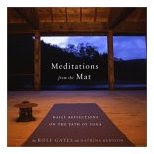 Rolf Gates was a former US military officer, ex-wrestler, ex-football player, ex-counseller, former alcoholic, a husband, a father and a yoga teacher. He also wrote a book, Meditations from the Mat — a daily yoga devotional that I have re-read many times over the years. It has never ceased to be relevant and inspirational, because Rolf Gates speaks from a real place of honesty and humility. This is a man who has lived life, made his mistakes, known love and loss — and have come to a place of peace through rediscovering the yoga of life.

This is one of my favourite anecdotes from Meditations from the Mat. Here, Rolf Gates reminds himself that the teachers have as much to learn from the students about yoga. (And I love it that he opens with a quote that should be carved on my forehead.)

Be on your guard against too much cleverness.

A while back I filled in for a friend who teaches yoga at a local gym. During the class I noticed a woman who was struggling, and I thought to myself how sad it was that she would probably never pursue yoga after the drubbing she was taking in what was clearly her first class. To my surprise, she appeared at my studio two days later to take my class. This time I felt certain that she would be too discouraged to continue. The classes at my studio are harder, longer, and about twenty degrees hotter than the class I'd taught at her gym. She stuck it out, with considerable effort, but I did not expect to see her there again. I've watched hundreds of students come and go, and this woman had all the signs of someone who would soon be going. I was certainly unprepared to see her yet again, two days later, ready for more.

Before long, she had become a regular in my 9 A.M. class. About a month later she showed up for my 7 A.M. class, on a day when she couldn't make it at nine. Arriving in the near dark on a chilly autumn morning, she demonstrated an unmistakable level of investment. After class, I asked her her name. She smiled and said, "Faith."

As a student of life, a student of yoga, I find the spirit of this student inspiring. In a goal-oriented world, with my competitive, reward-focused character, it reminds me that the most important thing in yoga (and in life) is not how well you can do the postures. What is more important is to show up, to work to the best of your abilities with the best intentions, and then to let go of all expectations, trusting that your effort will lead you to where you need to be.

All you need is faith.

Posted by darkorpheus on Wednesday, December 27, 2006