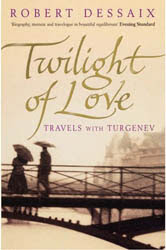 I've just finished Twilight of Love by Australian author Robert Dessaix. In a sort of introduction to the book, Dessaix provides the background to how he came to this journey, to Turgenev, and writing this book. When he was about 11 or 12 years old − a long time ago, when "the first sputnik began crisscrossing the sky", Dessaix bought himself a Russian dictionary. That purchase changed his life and set him onto a lifelong Russian romance. Within weeks he signed up for Russian classes, studied a year in Moscow, and eventually began teaching Russian language and literature to students.

Dessaix had intended to trail the footsteps of Russian writer Ivan Turgenev across Germany, France and Russia, to the places he had lived, loved, and wrote his novels. Yet like all good journeys, he meandered, "so crabwise, as it were, while seeming to fix my sights on Turgenev, I have ended up scuttling past him, heading for a broader target."

For a great part of the journey, Dessaix reveals to us how Turgenev spent forty years in love with the diva Pauline Viardot, following her and her husband around Europe until the end of his days. It was a bizarre menage a trois, as Turgenev was on good terms with the husband, Louis Viardot. It gives a perspective into another way of love, not the twosome affair that we are used to. Dessaix asserts that Turgenev understood he was never meant for the conventional twosome love. In fact, for a man so concerned with love, Dessaix noted that there was never any "happily-ever-after" in Turgenev's stories. The characters come to passion, illicit or forbidden in some ways, and it ends. Turgenev continued to have relationships with many other women, but his devotion to Pauline Viardot was unquestionable and complete.

Nowadays I expect we'd call such a scene high camp, but in 1843 it was deliciously theatrical. They knew how to do things in those days. He was twenty-five and she was twenty-two, and he was hers forever.

Dramatic, almost too unreal. Something changed in us between the time of Turgenev to present days. We are unable to love without fulfilment; we have come to assume love and happiness as our inalienable birthrights. We find it hard to believe in love like that, love that could just be − yet there is something that still remains in us that admires the chaste devotion Turgenev had for his Pauline Viardot. We have lost the vocabulary for it.

Yet all the words I might find to describe this love somehow miss the mark. To call it a 'great love affair' makes it sound oddly banal, as if he and Viardot were lovers, which, as far as anybody knows for certain, they were not. To say he was 'deeply in love' with her all his life makes him sound eternally frustrated in his feelings, even adolescent, yet for most of his life it was a stable, enriching love. It was not just a matter of 'passion', either, although there was ardour there of a kind, especially in the early years. Nor was it merely disembodied 'adoration' − in letter after letter he kissed her hands and her feet (although not her lips.) …

One thing seems obvious to me: a love such as this is only possible between two points in a triangle. Otherwise there will be thunder and lightning and what links the two lovers will eventually break asunder. The third point may be a husband or wife or it may be something else entirely.

Quite possibly there is no name at all for this kind of love. Perhaps, in fact, there is no need for a name since so few of us will ever experience anything like it. For the lives most of us lead, the old words will almost certainly do, one replacing the other as the years go by. On the other hand, if I could fin the right word for what Turgenev felt, perhaps the love my own life is rooted in would grow even more luxuriantly.

I want to know what it felt like to love someone like that. I want to find the words.

Dessaix goes back and forth between Turgenev's life and his writings. For him, the focus of Turgenev's life's works is not the politics − nor is it the nihilism, the philosophy that is supposed to have sparked a failed revolution and led the Tsar to free the serfs.

Rather, it is Love. How to love. That is core of Turgenev's life, says Dessaix. Dessaix it seems, following the footsteps of the Russian author, is also exploring his own path to love in twilight, questioning what is means to love, his own realisation of Love. And he leaves us with these thoughts:

Human life may seem pointless and always end badly, but you must make your peace with it. If lasting happiness escapes you, you must resign yourself to magnifying the blissful moments. If burning pasion kaleidoscopes into something slower, mellower and more sweet-tempered, then you must have the grace to warm yourself by this gentler flame. If shafts of light are rare, or only a mirage, wait for them quietly all the same. If love, when you try to lay hold of it with your hands or even just your heart, slips from yout grasp like water because there's no one there, you must reconcile yourself to loving what you find. Love is never enough. It must always be enough. There's nothing else. That, at least, is what I hear him say when he talks to me.

I had picked up the book expecting something else. I had not imagined a treatise of love. It is introspective, lyrical, romantic and well-written. It warms me to the idea of reading Turgenev.

My thanks to Acquistionist for recommending Robert Dessaix.

Posted by darkorpheus on Tuesday, February 20, 2007

Great review! I am completely uninformed about Turgenev, but the book sounds fascinating.

Thanks, I am not very informed about Turgenev either - mainly from critical essays on Russian Literature that mentions him. But Dessaix makes him sound readable, relevant - and a kind of romantic too.

Maybe we should all go read Turgenev.

This sounds really quite good. I've only read one Turgenev book before but it's been so long ago.

This sounds quite good, although I wonder if I wouldn't want to read Turgenev first -- did you find you wished you had read Turgenev before taking this book on?

iliana: You remind which Turgenev that you read? Any good? I'm wondering if I should start with Virgin Soil. Hmm.

Dorothy: Actually, I have always put off reading Turgenev because I assumed (from all those critical essays) that he was a stuffy political writer. Dessaix added an emotional angle to his works, and it makes makes Turgenev seems more approachable.

Definitely a bit of my reading Turgenev will now be influenced by Dessaix's book, but these days it's impossible to read anything in a vacuum.

I like that Dessaix's novels weave in literary landscapes and big ideas like love. The review is wonderful!

I have never read Turgenev before, but I recently bought a book by him. This makes me want to read the book and the Dessaix book as well.

Acquisitionist: Yeah, the melting together of literary landscape and with ideas is just beautiful. I was looking at "Corfu" too, and it seems to work on that level too.

Danielle: Dessaix just writes beautifully about Turgenev, doesn't he? Which Turgenev will you be reading? :)