COMICS | Fallen Angel: Back In Noire 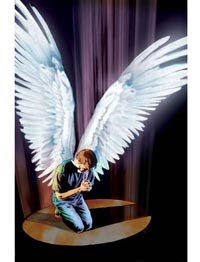 I just finished Fallen Angel: Back In Noire by Peter David, J.K. Woodward & Kristian Donaldson. While reading it, I realise I missed volume 2 of the IDW run of the Fallen Angel series, so there were some minor plot details that I'm clueless about.

BACKGROUND TO THE SERIES:

Fallen Angel: Back In Noire is the third installment of the IDW run of Peter David's graphic novel series about Liandra "Lee", the Fallen Angel. She is a sort of superheroine in the city of Bete Noire, "the city that shapes the world". As the back story was revealed in Fallen Angel: To Serve In Heaven, she was a former guardian angel (of the heavenly sort, with wings and all) who fell from the grace of God and found herself as the Court of Last Resort for the desperate in Bete Noire. She has the power to enforce her will, but all who comes to her are subjected to her judgement. She may help you if she finds your cause worthy, but she will just as soon hasten your end if she deems it so.

According to Lee, God has no say over the city of Bete Noire. Instead, it is ruled over by The Hierachy, through the power of the Magistrate. The Magistrate has dominance over everything within Bete Noire. It is a position passed from father to first-born son, and a ritual is performed on or after the son's 18th birthday to seal the transfer of power. Bete Noire is later revealed to be the Biblical city of Enoch, and the Magistrates are direct descendants of the city's founder, Cain.

Last we left off, Lee's son, Jude, had taken over as the Magistrate of Bete Noire. Jude is a priest and he still wears the collar. He is new to the city and he believes he can use his power for good, not realising the corrupting influence of his new position.

Back In Noire explores Jude's new role as Magistrate, and how it creates a conflict of interest with Lee when Jude arrests the local drug lord, Asia Minor, and placed him on trial. Lee on the other hand, needs Asia Minor's help to save a man's life. The story is resolved a little too conveniently, but it has Jude compromising his ethics for a way to end the incessant voices in his head. He has taken the first step to condemning himself, and it is hinted that darker factions are waiting on the sidelines. And they are patient.

Fallen Angel has a great backstory ― rivalries between agents of divine and mystical powers, as well as an interesting protagonist with perpetual PMS. The story opens with a vampire-like attack, and the Fallen Angel makes her entrance with these earth-shattering lines:

I haven't slept in two days.

And I've got cramps.

I am so not in the mood for this shit.

Even when Jean Grey was the Dark Phoenix and threatening to destroy earth, you still wouldn't catch her admitting to cramps.

Lee is something of a reluctant heroine, as you can tell. Unfortunately, Fallen Angel still only has something of a cult following only, and I truly believe it deserves a wider readership. Perhaps not everyone has patience with a comic series that takes time to unfold little backstories and drop small hints of future things to come.

Fallen Angel even has a premise similar to Garth Ennis's Preacher on the subject of divinity. When Jude asks Lee why Evil exist, she replies that God wants to die. Humanity was intended to be God's crowning achievement, and God was prepared to move on after its creation. However, the constant prayers of people on Earth prevent him from being able to do this. For centuries, God has been sending disasters to Earth in the hope that people will stop believing in Him and let Him pass. It is an interesting concept ― not to mention daring. It is also one of the reasons why Peter David remains one of the more interesting writers around.

Finally, Back In Noire has a second story where Lee's predecessor ― a young girl named Lin ― returns to Bete Noire. It develops the idea further of the sentience of the city, as well as explore a story of the darker history of the city. A long time ago, the Magistrate one day decides to neglect his duties. This power vaccum led to the emergence of newer factions, and the Fallen Angel (Lin) arrived as a balancing force.

On the whole, the stories in Back In Noire are not as strong as the first volume, To Serve In Heaven, and I don't think there was much explored in the conflict of interest between Jude and Lee ― although there was some freaky incestuous stuff happening between Jude's half-brother, Jubal and Jubal's mother. The stories seem to serve only as fillers in the on-going power struggle for dominance of Bete Noire, but weak plot, and little forward movement in the storylines. And they probably will not make sense unless you are already a Fallen Angel fan.

Sounds like an intersting series. Me and my husband will look it up thanks!

you know, i've had "fallen angel" in my amazon wishlist for the longest time, and on "high" priority. and yet, after a while i kind of forgot why i wanted to get it.

you've just reminded me - thanks!

Rhinoa You're welcome. It is an interesting series with lots of potential - just slow to build-up.

Jean Pierre Oh - did I spoil anything for you then? Oh well, you'll catch up sooner or later.

I sure about writing a pebble, but he was the only writer who could convince me to read Star Trek novelisations. :)

I love his ST:TNG novels with Q.

don't worry - i just scanned over the bits that gave things away, but i now remember why i'd given "fallen angel" a high priority on my amazon wishlist...!

ST:TNG with Q = The Star Trek: The Next Generation novelisations with Q as one of the important focus of the story.