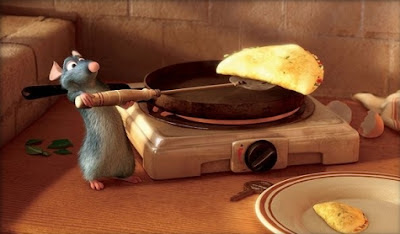 I am love with a cartoon rat that cooks.

Without a doubt, Ratatouille has made it as my favourite movie of 2007. It is basically a simple (if outlandish) story told with humour and heart: a rat, Remy, with a highly developed sense of taste and smell who wants to call. His inspiration is the deceased formerly 5-stars rated chef, Gusteau, who wrote the book, Anyone Can Cook, and who appears as a spiritual guide, offering pep-talks to this little rodent chef with big dreams. Through some incident that separated him from his rat family, he arrives in Paris, in the Gusteau's restaurant where he meets the inept kitchen boy, Alfredo. By some chance rat and boy realise Remy can teach Alfredo how to cook by some feat of puppetry on the boy's body (It's outlandish, yes, but it's a cartoon and it's so fun you just suspend disbelief.)

Through the talents of the little rat the restaurant is brought back to it glory days. In between they have to battle the villian of head chef Skinner, the health inspector and finally, the most powerful food critic Anton Ego, voiced by the majestic Peter O'Toole.

It's a beautiful picture, with the city of Paris rendered in subtle palette of dreamy nostalgia. It's also chocked full of little details that catches you ― like the scene when the rats take over the kitchen, one of the rats was boxing a piece of meat to tenderize it, or Anton Ego's coffin-shaped office, or the oven mitten Remy sleeps in in Alfredo's dingy apartment.

Visually the film is so well-made, it's addictive. The animators have obviously spent some time observing the scamperings of rodents, their leaps and bounds and little ratty gestures. 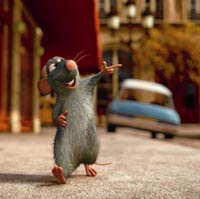 Remy himself is just adorable, with his pink bulb of a nose, with those big expressive eyes. The animators have gifted him with the cutesy gestures ― the little nods, the modest shrug when Alfredo first asks him if he could cook, the way his cheeks just droops a little so that his mouth is more expressive. Most of all, there is that child-like dreamy look everytime he looks out at the view of Paris and all that the city promises for someone who dares to dream.

And the way he walks, on two legs in a kind of swagger, almost like John Travolta ― if John Travolta was a rat. Or if Saturday Night Fever was about cooking rather than dancing.

Can you just tell how besotted I am with this little rat?

I suspect I will be watching Ratatouille again further down the weeks. It will definitely be one of my DVD purchases. It is a picture for children and adults to enjoy, and it is all about a little rat who don't want to settle for eating garbage, and who is given an extraordinary talent, and goes all out to be what he can be.

Near the end of the film, Anton Ego, the jaded antagonist food critic realises a rat has cooked the best meal he had ever eaten. And he wrote this:

In the past, I have made no secret of my disdain for Chef Gusteau's famous motto: Anyone can cook. But I realize that only now do I truly understand what he meant. Not everyone can become a great artist, but a great artist can come from anywhere. It is difficult to imagine more humble origins than those of the genius now cooking at Gusteau's, who is, in this critic's opinion, nothing less than the finest chef in France. I will be returning to Gusteau's soon, hungry for more.

I love that little rat with the pink bulb nose.

For some reason, I missed this one! I'm generally the first one there for a Pixar movie! Glad to see you liked it!

I really want to see this. It looks really fun. I have been trying to place who does the rats voice, I must look it up on imdb.

I'm dying to see this! I love Pixar, and the trailer for this one is so cool. Unfortunately it is only showing dubbed around here, so I will probably have to wait for the dvd.

this looks brilliant!! i can't wait to see it.

cartoons are so wonderfully warm.

Stephanie OMG! You should try to get it on DVD! It's so warm and fuzzy I'm going to watch it again!

Rhinoa I don't think anyone famous did the rats' voice though. But they are so cut. Little pink noses with pink paws. Oh.

Nymeth Dubbed? Oh, then you'll lose some of the flavour of the original voices. Yes, get it when it's out on DVD. It's great!

Jean Pierre Isn't it beautiful? The colours are warm and smooth. There's a lot of heart in the picture.

I know I'm promoting a cartoon but it's just so sweet!

Like you said it's outlandish, but the friendship between Remy and Alfredo is tenderly portrayed. The movie is a touching experience for me.

Matt The outlandishness is part of the fun. And yes, that friendship between Alfredo and Remy is so sweet. And so is Remy's relationship with Emile and his dad and the rest of the ratty tribe. So sweet when they rescued Remy from Skinner's car and then took over the kitchen.

well, if its a good film then what medium it is doesn't matter! promote away! you've certainly got me onboard - i didn't think too much of it at first, although the mini-promotion was so miniscule that if they used the same promotion for a brad pitt film, not even his pretty little chest could make people see it...

i simply can't wait to see this now!!